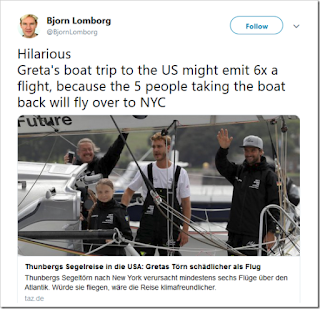 Björn Lomborg tweeted the above extract from TAZ (link).

Does that mean Greta is swimming back to Germany? Or is she flying back? 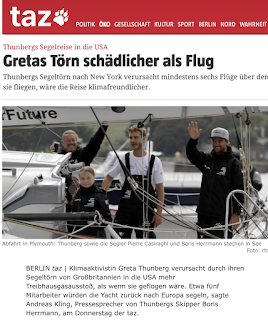 Translation.
BERLIN taz | Climate activist Greta Thunberg causes more greenhouse gas emissions from her sailing trip from the United Kingdom to the United States than if she had flown. About five employees would sail the yacht back to Europe, said Andreas Kling, spokesman for Thunberg skipper Boris Herrmann, on Thursday the taz.

"Of course, they fly over there, that's no different," says Kling. Herrmann will also take the plane for the return journey. The sailing trip triggers at least six climate-damaging air travel across the Atlantic. If Thunberg had flown with her father, only two would have been necessary to come to New York.

According to the atmosfair emissions calculator, a flight from New York to Hamburg has a climate impact of around 1,800 kilograms of carbon dioxide. That is more than three quarters of what every person is entitled to each year if global warming is to be stopped at 2 degrees. 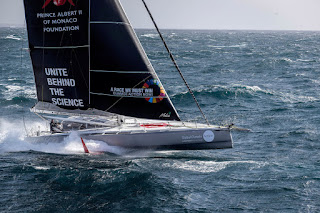 Because flights are so damaging to the climate, Thunberg had been looking for a better way to travel to the United Nations Climate Change Summit in New York in September. On Wednesday afternoon, the 16-year-old struck aboard the high-sea yacht "Malizia II" together with the two professional sailors Herrmann and Pierre Casiraghi and their father Svante and a filmmaker in the southern English town of Plymouth. The ship is powered by the wind, electricity for navigation and communication is generated by solar cells.

So, this little (mis)adventure is creating 6 "climate-damaging" (in her eyes at least) flights. And note Taz writes:

If Thunberg had flown with her father, only two would have been necessary to come to New York.