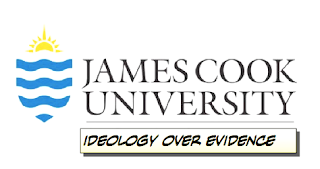 James Cook University has decreed that collegiality overrules empirical evidence.
Let's examine these terms:
Collegiality is the relationship between colleagues.

Colleagues are those explicitly united in a common purpose and respecting each other's abilities to work toward that purpose. A colleague is an associate in a profession or in a civil or ecclesiastical office.

Empirical evidence is information acquired by observation or experimentation. This data is recorded and analysed by scientists and is a central process as part of the scientific method.
That's right, James Cook University is a place of education that ignores empirical evidence.

As the great journalist Graham Lloyd reported in The Australian

When marine scientist Peter Ridd suspected something was wrong with photographs being used to highlight the rapid decline of the Great Barrier Reef, he did what good scientists are supposed to do: he sent a team to check the facts.

After attempting to blow the whistle on what he found — healthy corals — Professor Ridd was censured by James Cook University and threatened with the sack. After a formal investigation, Professor Ridd — a renowned campaigner for quality assurance over coral research from JCU’s Marine Geophysics Laboratory — was found guilty of “failing to act in a collegial way and in the academic spirit of the institution”.

So, the academic spirit of  James Cook University is to promote false science rather than empirical evidence.

Image if, when Barry Marshall discover the true cause of peptic ulcers, he fell in line with the collegiality of medical experts who all agreed that peptic ulcers were caused by stress. There would be many people suffering from ulcers now.

Back to Graham Lloyd's article


Professor Ridd poses the question: “Is the situation in marine science likely to be worse than in medicine and pharmaceuticals, psychology, education? Do we have a decent system of replication and checking of results?

Professor Ridd wants an independent agency to check the science before governments commit to spending hundreds of millions of dollars.

This is another example of the Pushers of the Man Made Global warming Hoax running scared as the pillars of the hoax crumble.

A new definition of academic misconduct