There has been much scuttlebutt recently about taking sceptics - usually using the pejorative term "denier" - to court; eg

The stupidity shown by their use of the term "climate denier" or "climate change denier"is that surely no-one could deny climate; and we sceptics known that climate has always changed.


The Courts & the Climate

she lists some "other voices have joined the discussion about climate change and the proper role of the courts,"
and follows with judges active in the climate debate and their participation in a three-day UK legal conference re AGW matters :

This is an enormous problem because the primary job of a judge is to be impartial. A judge with an agenda – whether it be climate, abortion, religion, or any other cause – is not, by definition, impartial. The public has a right to know the name of every judge who tosses aside his or her impartiality in favour of activism.

Including senior judges and lawyers from across the world, the three-day conference on “Climate Change and the Law” was staged in London’s Supreme Court. It was funded, inter alia, by the Supreme Court itself, the UK government and the United Nations Environment Program (UNEP).

As one of the two UN sponsors of its Intergovernmental Panel on Climate Change, UNEP has been one of the main drivers of alarm over global warming for 40 years.

During the conference a French Lawman, Phillipe Sands after showing doubt whether COP21 would come to a legally binding treaty, "it is now time for the courts to step in, to enforce this as worldwide law."

“The most important thing the courts could do,” he said, was to hold a top-level “finding of fact”, to settle these “scientific disputes” once and for all: so that it could then be made illegal for any government, corporation (or presumably individual scientist) ever to question the agreed “science” again. Furthermore, he went on, once “the scientific evidence” thus has the force of binding international law, it could be used to compel all governments to make “the emissions reductions that are needed”, including the phasing out of fossil fuels, to halt global warming in its tracks.


The fact that it could be seriously proposed in the highest courtroom in the land that the law should now be used to suppress any further debate on what has become one of the most contentious issues in the history of science (greeted with applause from the distinguished legal audience) speaks volumes about the curious psychological state to which the great global warming scare has reduced so many of the prominent figures who today exercise power and influence over the life of our Western societies. 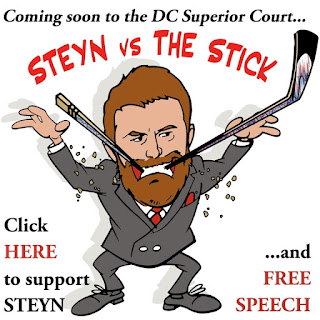 Mark Steyn who is suing and is being sued by Michael "Fake Hockey Stick" Mann says, of the lack of impartiality of Lord  Carnwath:


This Carnwath guy is betraying the entire legal inheritance he purports to represent, but he's "saving the planet" so to hell with core liberties.

The Shrill hoaxers long ago dishonoured "Science" and now the Shrill Lawmen are dishonouring "Law."