Another debunking of one of UNSkeptical UNScience -SS's so-called "Myths." This time debunking their #25.

Plenty of papers show this is the case.

Houston and Dean is as good as any.

HOUSTON, J.R. and DEAN, R.G., 2011. Sea-level acceleration based on U.S. tide gauges and extensions of previous global-gauge analyses. Journal of Coastal Research, 27(3), 409–417. West Palm Beach (Florida), ISSN 0749-0208. Without sea-level acceleration, the 20th-century sea-level trend of 1.7 mm/y would produce a rise of only approximately 0.15 m from 2010 to 2100; therefore, sea-level acceleration is a critical component of projected sea-level rise. To determine this acceleration, we analyze monthly-averaged records for 57 U.S. tide gauges in the Permanent Service for Mean Sea Level (PSMSL) data base that have lengths of 60–156 years. Least-squares quadratic analysis of each of the 57 records are performed to quantify accelerations, and 25 gauge records having data spanning from 1930 to 2010 are analyzed. In both cases we obtain small average sea-level decelerations. To compare these results with worldwide data, we extend the analysis of Douglas (1992) by an additional 25 years and analyze revised data of Church and White (2006) from 1930 to 2007 and also obtain small sea-level decelerations similar to those we obtain from U.S. gauge records.

Ablain et al 2009 and Cazenave et al 2008 confirm the slowdown in rate of sea level rise, consistent
with the pause in temperature.

The 2008 Cazenave paper looks at the period from 2003-2008 and finds a decomposed (into the steric or heat and eustatic or volume components) sea level rate of increase of ~2.3mm pa.

During the 20thC the rate of sea level increase was ~ 1.8mm pa. But there were periods when the rate was more and when it was less, even negative, arguably in correlation with PDO phase shifts. This is exactly what we are seeing since 1992. From 1992-2003 we saw a rate of increase greater than average; from 2003 we have seen a rapidly decreasing rate of increase, again arguably in correlation with PDO phase shift. 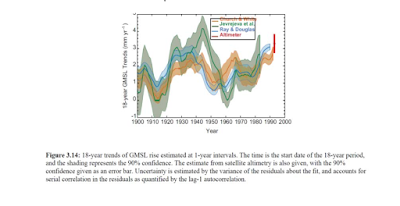