Pope's Encyclical is an Immense Pile of Filth 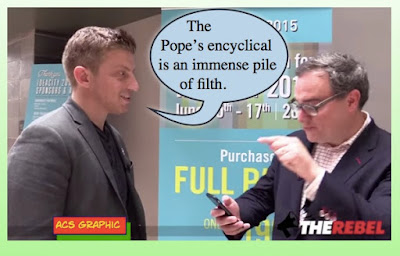 Ezra Levant was pleased to be able to interview him for TheRebel.media at this year's IdeaCity in Toronto.Epstein is with the Center for Intellectual Progress, where he works to get the facts out about the oil and gas industry. He and Ezra talk about the Pope's environmental encyclical. Epstein says that if the pope from 300 years ago could see our world today, he'd say it was actually cleaner and healthier than his own era.

The Earth, our home, is beginning to look more and more like an immense pile of filth.

"the Pope’s encyclical is an immense pile of filth."


Epstein and  Levant agree that the communists liked industry, liked factories but said they wanted to own the factories, whilst today’s progressives don’t want the factories. The Shrill want to go back to living in a pre-industrial era.

See video of interview below.


Editor's Note: Perhaps the Shrill and the Pope would prefer going from Horse Power, back to the Horse and have the world, like it was in 1898, drowning in horse manure.