Posted by Geoff on March 08, 2015
Some recent items in the blogosphere:

We were told a few months ago that it would only be a matter of time before the satellite datasets caught up with the surface ones, and confirmed that global temperatures had reached a record high.
Well, we’re still waiting!

Both UAH and RSS have recorded drops in temperature in February, and 12-month averages remain well below previous highs. 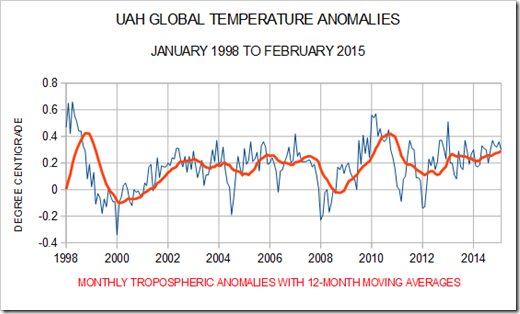 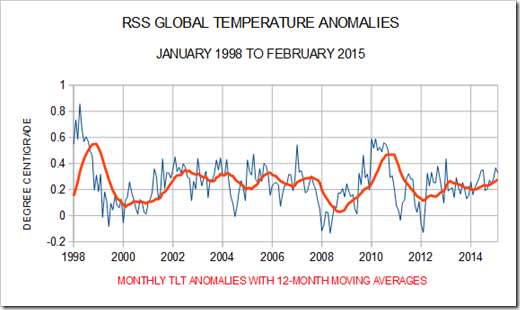 Motorist discovers his £5,000 car frozen solid in a block of ice 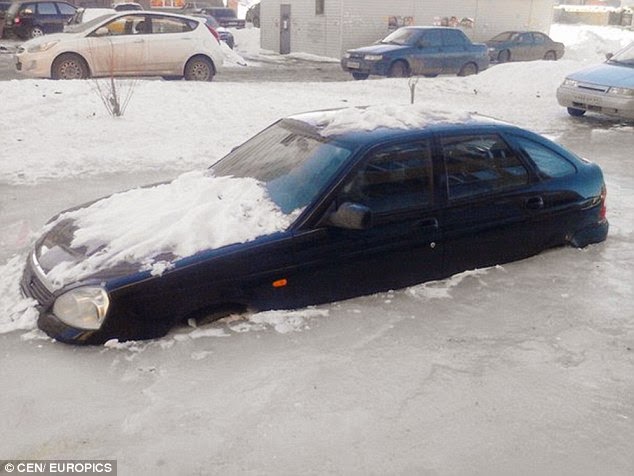 Connecticut is experiencing its coldest February in recorded history. So is Michigan. So is Toronto. Cleveland and Chicago are experiencing their second coldest February in recorded history. Frigid and record cold temperatures are being set from Key West to International Falls. At the same time, blizzard after blizzard is burying much of the nation with record winter snow totals, with winter snowfall records beings set from Boston to Denver.

In the past few weeks, statements of scientists challenging the hypothesis that carbon dioxide (CO2) emissions from fossil fuels is causing catastrophic global warming are being criticized on ad hominem grounds. The charge is that there exists an inherent conflict-of-interest, owing to their sources of income, specifically income from fossil-fuel companies or pro-fossil-fuel organizations otherwise.

The starting point (it was surely orchestrated) was the attack on Dr. Willie Soon by the February 21, 2015 New York Times article, “Deeper Ties to Corporate Cash for Doubtful Climate Researcher,” by Justin Gillis and John Schwartz. The article apparently was inspired by a Greenpeace report that researched sources of income for Dr. Soon, who is employed as a research scientist for the Smithsonian Institute.