NASA:GISS; BoM; Send In the Clowns (OOPS - sorry - You already have.) 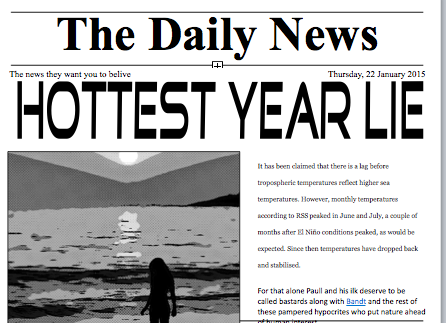 Although this blog is dedicated to exposing the "Man Made Global Warming Hoax;"  "the Greatest Deception in History": the falsified AGW hypothesis; we are open to any true data that show that man's emissions of Carbon Dioxide are causing runaway warming.

In fact we have re-published Melbourne Railway Engineer Driver and Unionist, Peter Faux' challenge here on this blog - but the original is on the blog of the adjudicator: (link)

Warmists of the world: The ball is in your court. The $10K Climate Challenge has been open for three plus years without a single serious challenge.

THIS challenge has been available for the Alarmists for more than three years; so far there has not been one serious scientific challenge to Peter's Challenge.

Wouldn't you think that the World Governments, the bodies who wish to penalise ordinary citizens who use fossil fuel sources of energy, would be running to support their (non-scientific) policy position.  But, with the exception of a few fairly unscientific attempts, Peter's $10K is still sitting safely in his coffers.

When we look at the TRUE story, we find that Gavin Schmidt has tweeked (CHEATED?) the data; that even with NASA:GISS' massaged data, 2014 was only 0.02ºC (YEP - two hundredth of a ºC) above the so-called previous warm year. And then, when questioned about their certainty, this quavering body said they were only 38% sure; or 62% sure that their alarmist prediction was wrong, the prediction that they based on massaged figures.

The Nasa climate scientists who claimed 2014 set a new record for global warmth last night admitted they were only 38 per cent sure this was true.

And when you look at the science, it was nowhere near the warmest, even of the last 18 years: (See below)
SO: How many news media reported the correction, when it was revealed that

2014 was NOT the hottest year ever

And Down-under, the Prime Body for Temperature Date, The Bureau of Meteorology (BoM) have updated their systems: (Has the Fairfax Press  updated their Editorial Staff for misspelling the name of our country?)

This August body, the Bureau of Meteorology, announced  that the town of Alice Springs had had its hottest day ever this week: (link)


The ABC was told on Tuesday night the temperature at Alice Springs airport reached 46 degrees Celsius at 3:21pm

However, it turned out that the BoM misread a thermometer and the reading was 5ºC less than the announced record temperature.


"The details are still under investigation," (BoM) climatologist Joel Lisonbee told the ABC. It looks like we had an instrument fault with our automatic weather station at the Alice Springs Airport. We do have other thermometers on site."

"We have some mercury and glass thermometers that did not show that spike to 46C."They showed the maximum temperature yesterday to be only 41.5C."


The Alarmist media announces the hottest year ever but doesn't announce the retraction.

When will the mainstream media again become sceptical and question the fodder that they are fed?