The myth of the moderate Muslim part 2

I have written about how Islam is not moderate and Muslims cannot be moderate if they practice their religion. The reason is simple; Islam offers a complete package; it prescribes its own legal system, its own economic, banking and trading system and social and political parameters. It is a contradiction in terms for Muslims to say they are law abiding if to be a Muslim means you must support laws other than the laws of the host nation.

Australia is a secular democracy. Our legal and political system is based on the separation of church and state. That separation is one of the great inventions of mankind. It allows people to worship their own religion without allowing any religion to force itself on the rest of society.

Islam does not support that separation. In every host nation Islam seeks to introduce aspects of its legal system, Sharia. They range from parallel marriage systems to halal certification which many food sources and outlets subscribe to and pay vast amounts of money to Islamic authorities.

In an ironic move Australia’s first Islamic politician Ed Husic was sworn into parliament using a Koran. The significance of that was entirely missed by Australia’s political and media classes. The fact that many of Australian politicians depend for their survival on Muslim votes is well known: 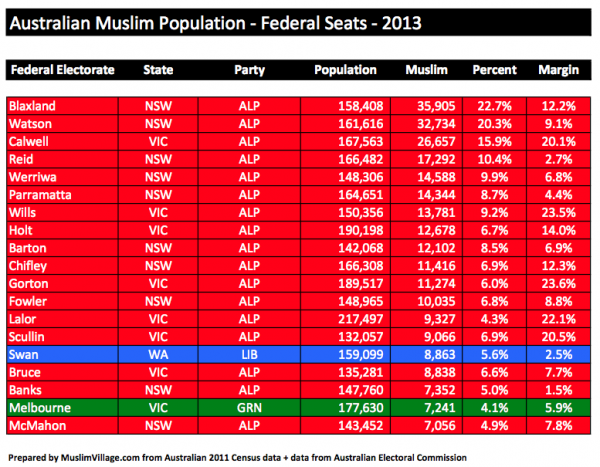 One wonders how long non-Muslim members will be required to be sworn in on the Koran. The seat of Reid is now held by Craig Laundy for the coalition and Laundy has wasted no time in currying Islamic favour after arguing strongly for the retention of Section 18C of the RDA; the company he now keeps speaks for itself: 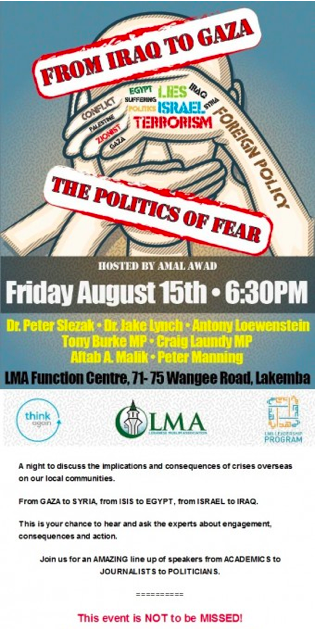 Lakemba is Islam central and recently featured a street protest in favour of ISIS. Andrew bolt has translated what the 100’s or protestors were chanting:

From Lakemba to Gaza. Obviously there is little support for Australia’s laws there. In fact Australia has the highest per capita contribution of home-grown fighters travelling to Iraq to support ISIS, the Islamic State which has taken over the cutting edge of militant Islam from the likes of Boko haram, the Taliban, al qaeda etc.

We have all seen the dreadful images of how militant Islam treats its victims and prosecutes its war to establish the Caliphate from Lakemba to Gaza: 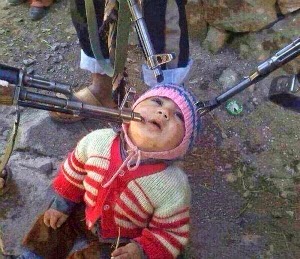 But how widespread is support for this and are there moderate Muslims protesting against what ISIS is doing.

Indonesia has banned ISIS. And in Australia there has been a reaction to one of the worst of the images of the ISIS monstrosity: 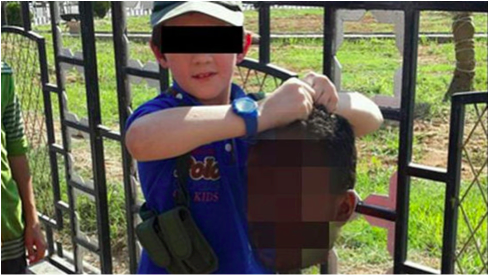 However while some Muslim leaders have complained about this image, which is far worse than what has been done by the Catholic Church in its despicable cover up of pedophiles no Muslim has come out against ISIS’s plan to carve out a world-wide caliphate. And some so-called moderate leaders have praised the enthusiasm of ISIS. Malaysian PM Najib Razak has described ISIS as brave. How sick is that; slitting the throats of women and children and shooting people in the back of the head is brave.

The Mosques are our barracks, the domes our helmets, the minarets our bayonets and the faithful our soldiers.

In short there is no evidence that there is consistent and sustained moderation within Islam and the comments about the vile images coming from ISIS and the barbaric actions of Islam else-where in the world are at best grudging and muted and ambivalent.

But that hasn’t stopped Australia’s media rushing, with few exceptions, to placate the head-cutters of Islam. The ABC of course is beyond the pale even defending the father of the young boy above. And this betrayal and capitulation by the ABC has been going on for years; who can forget Trioli’s advice to sit down with Bin Laden and listen to his grievances.

The default position for most of the media is to say they know a few nice Muslims or that all the problem is due to a few bad eggs.

Even members of the coalition mouth such appeasing and craven words. Liberal Sussan Ley says Islam is a religion of peace. That degree of delusion is only exceeded by prominent female members of the media such as Ida Buttress who declare that criticism of Islam is racism.

The fact is the West is currently being betrayed by its spokespersons and political class. It is evident that even if Islam has moderate members willing to prioritise the laws of its host those moderates cannot contain the violence and monstrosity of the non-moderates. This has been seen before when Nazi Germany plunged the world into War when only 5% of its population were actually members of the Nazi party. Brigitte Gabriel sums it up here. What a pity Australia does not have such women as Gabriel. The point is it doesn’t matter if a majority of Muslims are moderate by whatever definition of moderate you use. The fact is Islam cannot control its excesses, its fanatics, its monsters even when they are a minority.

Without a concerted effort to recognise Islam for what it is, an invading ideology, the progress by which Islam supplants the laws of its host nation is inexorable. The facts of this progress are stark because we have host nations throughout the world with varying populations of Muslims. Things get worse as the Muslim population increases:

Islam’s Effect On Society At 2%-5%
At 2% to 5%, they begin to proselytize from other ethnic minorities and disaffected groups, often with major recruiting from the jails and among street gangs. This is happening in:
.

After 80%, expect daily intimidation and violent jihad, some State-run ethnic cleansing, and even some genocide, as these nations drive out the infidels, and move toward 100% Muslim, such as has been experienced and in some ways is on-going in:


If there were moderate Muslims you would expect as the population increased that the moderation would dominate; in fact the opposite happens.

There is no moderate Muslim and until the West and Australia wakes up to that the future of Australia is plain; and it is not moderate.