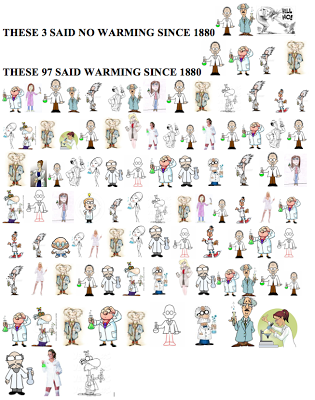 This blog has previously written of the flawed 97% of scientists blah blah myth. Some examples:

The major argument supporting the man made global warming scam [AGW] is that a vast majority of legitimate climate scientists support it while only a motley crew of eccentrics and cranks oppose it. In actual fact the support for AGW is entirely bureaucratic. By that I mean that all the major organisations which publically espouse AGW are in effect bureaucracies with government affiliated or appointed heads who keep tight muster on the underlings and enforce conformity.

And many other similar posts.

Now Heartland's Joe Bast and Taylor Smith have re-examined the Myth in a paper entitled:

Research & Commentary: The Myth of a Global Warming Consensus

Many legislators are told they must enact climate change legislation because an alleged “scientific consensus” holds that man-made climate change requires urgent action. They are repeatedly told “97 percent of climate scientists agree” that human activities are causing dangerous climate change, and that the only way to prevent this disaster from occurring is to adopt government policies that raise the price of fossil fuels and subsidize or mandate the use of alternatives such as wind and solar energy. But what evidence is there for such unanimity? What do scientists really say?

The United Nations’ Intergovernmental Panel on Climate Change (IPCC) claims to represent more than 2,500 scientists who agree that man-made global warming is a serious problem. But this is misleading. While a total of 2,500 (or some similar number) scientists participate in some way in the writing or review of its reports, the IPCC’s working group responsible for assessing the causes of climate change and its future trajectory consists of only about 600 scientists, and many of those are activists working for environmental interest groups. For the Fourth Assessment Report, only 62 were responsible for reviewing the chapter that attributed climate change to man-made greenhouse gas emissions, with 55 of those being known advocates of the theory of man-made global warming. Of the seven impartial reviewers, two disagreed with the statement, leaving only five credible scientific reviewers who unequivocally endorse the IPCC’s conclusion, a far cry from 2,500.

They look at Naomi Oreskes' highly dubious essay which became the basis of her book Merchants of Doubt.  They also examine the flawed papers of  Doran and Zimmerman 2009, William Anderegg et al 2010 and the more recent travesty Cook et al 2013.

In striking contrast to these studies, which try but fail to find a consensus in support of the claim that man-made global warming is a serious problem, many authors and surveys have found disagreement and even a majority of scientists oppose the alleged consensus. Surveys by German scientists Dennis Bray and Hans von Storch have found that most scientists disagree with the consensus on key issues such as the reliability of climate data and computer models and do not believe key climate processes such as cloud formation and precipitation are adequately understood to predict future climate changes.

Surveys of meteorologists repeatedly find a majority oppose the alleged consensus. Of the various petitions circulated for signatures by scientists on the global warming issue, the one that has garnered by far the most signatures – more than 31,000 names – says “there is no convincing scientific evidence that human release of carbon dioxide, methane, or other greenhouse gases is causing or will, in the foreseeable future, cause catastrophic heating of the Earth’s atmosphere and disruption of the Earth’s climate.”

They then say that:


Read the full study here - http://heartland.org/policy-documents/research-commentary-myth-global-warming-consensus
Posted by Geoff on May 15, 2014