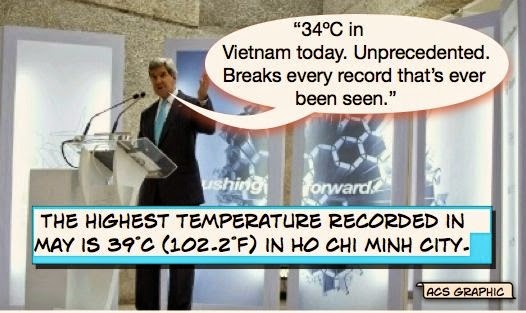 Secretary of State John Kerry told an audience in Mexico on Wednesday that temperatures in Europe and in Vietnam were “unprecedented” and broke “every record that’s ever been seen.” However, although it was hot that day, he was off the mark.
Speaking at an environmentally-friendly technology event in Mexico City, Kerry said he had just caught a CNN weather report in his hotel and “saw the temperatures around the world right now.”

“Thirty-four degrees centigrade [Celsius] in Vietnam today, in May. Twenty-nine, thirty, thirty-two, thirty-three in places all around Europe,” he said.

“Unprecedented. Breaks every record that’s ever been seen.” The hottest places in Europe in the heat of the day on Wednesday, according to weatheronline.co.uk included parts of Russia, Germany, central Italy and southern Turkey, all in the 29-32°C (84-89°F) range.

Kerry again dragged out the multi- falsified "97% of Scientist."  He calls us flat-earthers?