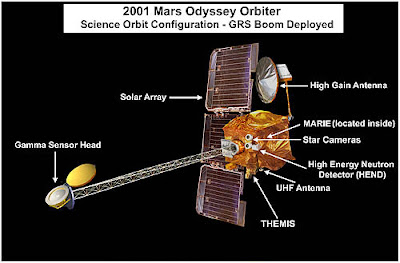 Mars Odyssey is a robotic spacecraft orbiting the planet Mars. The project was developed by NASA. The Mars Odyssey spacecraft journeyed more than six months before placing itself in orbit around the red planet in October 2011.


On March 23, 2013 the Mars 2001 Odyssey spacecraft completed 50,000 orbits around the Red Planet. If it's not a mixed metaphor to call a solar-powered robotic orbiter a workhorse, then Mars Odyssey is a serious contender for the title of Workhorse of the Solar System. In December 2010 Odyssey broke the previous record to become the longest-working spacecraft at Mars.

National Geographic, in 2007, wrote of the melting Martian Ice Caps:


Simultaneous warming on Earth and Mars suggests that our planet's recent climate changes have a natural—and not a human-induced—cause, according to one scientist's controversial theory.

Earth is currently experiencing rapid warming, which the vast majority of climate scientists says is due to humans pumping huge amounts of greenhouse gases into the atmosphere.

Mars, too, appears to be enjoying more mild and balmy temperatures.

In 2005 data from NASA's Mars Global Surveyor and Odyssey missions revealed that the carbon dioxide "ice caps" near Mars's south pole had been diminishing for three summers in a row.

Prof. Habibullo Abdussamatov, head of space research at St. Petersburg's Pulkovo Astronomical Observatory in Russia, says the Mars data is evidence that the current global warming on Earth is being caused by changes in the sun.

"The long-term increase in solar irradiance is heating both Earth and Mars," he said.


Prof. Abdussamatov, who reaffirms, in support of his theory, which, because of strong solar activity, all the planets in the solar system have experienced an increase in temperature in recent years, far more significant than that on Earth, as has happened on Jupiter and Mars, where the temperature increase is also indicated by the decline of the polar caps. Even in the more distant planets like Uranus, Neptune and Pluto can be observed temperature increases.


But now everything will change: the sun came into being relatively "quiet", the solar cycle 24, after a last gasp, end with very few spots, the cycle 25 will be negligible.

Within a few months the sun will start towards a phase of further "dormancy", characterized by very few sunspots. Accordingly, the climate of northern Europe, including the UK, within a few years will become icy.


This week we have a report from the UK:

According to Professor Lockwood the late 20th century was a period when the sun was unusually active and a so called ‘grand maximum’ occurred around 1985.

Since then the sun has been getting quieter.

By looking back at certain isotopes in ice cores, he has been able to determine how active the sun has been over thousands of years.

Following analysis of the data, Professor Lockwood believes solar activity is now falling more rapidly than at any time in the last 10,000 years.

He found 24 different occasions in the last 10,000 years when the sun was in exactly the same state as it is now - and the present decline is faster than any of those 24.


If we had a vote, I would vote for warming