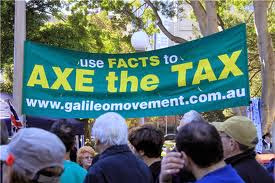 To all Federal MPs

Your dealings with some journalists have our empathy.

http://www.galileomovement.com.au/media/cubby_redacted.mp3
Redacted personal phone number and address. Transcript here:
http://www.galileomovement.com.au/docs/ROBERTS,Malcolm-InterviewWithBenCubby-30July2012WorkingCopy2.pdf
Details and observations of Ben's behaviour are on pages 30 to 40 here:
http://www.conscious.com.au/docs/new/13_appendix.pdf
Admits knowing little about formation and background of UN climate body. Yet his work spreads its claims.

http://www.galileomovement.com.au/media/WendyCarlisleABC_BackgroundBriefingResearch_23_06_11%204_22PM.mp3
Observations of Wendy's behaviour and propaganda is on pages 21 and 22 here:
http://www.conscious.com.au/docs/new/13_appendix.pdf


The work of journalists such as Wendy Carlisle has, in my view, enabled the spread of bogus science to the detriment of Australia. Tax payers fund her yet she's abetting the fleecing of taxpayers via and unjust and unfounded tax driven by a political agenda. That the ABC specifically endorses and supports the work is deeply troubling. It raises questions as to whether the ABC is being politically manipulated by the government, senior management and/or a journalistic culture that disregards facts and fairness in pursuit of ideology and political agenda.

Mike Carlton earlier failed to provide empirical scientific evidence for his climate belief. Instead, he introduced religion, race and his "conspiracy theories" into Australian climate discussions. Such tactics are increasingly seen as diversions hiding lack of evidence.

Contrary to facts, the vicious and false implied anti-Semitic smear was spread by Graham Readfearn and Ben Cubby.

5. Detailed analysis of five prominent ABC programs and the 'work' of some ABC journalists is here:
http://www.conscious.com.au/docs/new/13_appendix.pdf

7. Strong journalists such as Andrew Bolt can be damagingly pressured and misled by journalists' hurtful false smears. See pages 30 to 40 here:
http://www.conscious.com.au/docs/new/13_appendix.pdf

Despite ample documented evidence some journos fail to discuss UN and Australian corruption of climate science.

Are they dishonest? Or are they group thinkers? Or dependent? Or lacking strength to question what they initially perceived as the popular tide? Or naively aligned with vested interests stealing money by fabricating, pushing and/or milking unfounded climate alarm?

Given the facts and empirical scientific evidence, is their behaviour in misrepresenting modest cyclic global warming that ended in 1998 irresponsibly or negligently incompetent or is it deliberately dishonest?

Given that too many federal MPs are afraid of the media's power, it's easy to see many were herded into falsely accepting fabricated and unfounded climate alarm. We empathise.

Should all Australians pay the price for abusive journalism? None should.

PS: To Wendy, Ben, Graham and Mike: If I'm in error anywhere please advise, specify and justify.
You have my contact details from our previous email and/or phone discussions.

At stake is human freedom, your freedom, our freedom
Posted by Geoff on October 03, 2013