Posted by Geoff on September 21, 2013
NZCLIMATE TRUTH NEWSLETTER NO 316

The claim that increase of human-induced “greenhouse” gases in the atmosphere would cause “global warming” ran into serious trouble right from the start.

It happens that there is no current technology that is capable of measuring the average surface temperature of the earth. There is no way that temperature sensors could be situated randomly over the whole surface of the earth, including the 71% that is ocean and 10% that is desert, and measure it all instantaneously for sufficient time to find if it is rising.

It is not even possible to measure the temperature reliably in one place. James Hansen of the Goddard Institute of Space Studies, who has made a reputation for promoting “global warming”, has an item on his website as follows:

Q. What exactly do you mean by SAT?

Q. What do we mean by daily SAT?

A. Again, there is no universally accepted correct answer. Should we note the temperature every 6 hours and report the mean, should we do it every two hours, hourly, have a machine record it every second, or simply take the average of the highest and lowest temperature of the day? On some days the various methods may lead to drastically different results.

Q. What SAT do the local media report?

A. The media report the reading of one particular thermometer of a nearby weather station. This temperature may be very different from the true SAT even at that location and has certainly nothing to do with the true regional SAT. To measure the true regional SAT we would have to use many 50ft stacks of thermometers distributed evenly over the whole region, an obvious practical impossibility.”

Having stated that there is no agreed way to measure the surface air temperature, he talks about the “true” value which nobody agrees to; Essex et al (2007) argue that “there is no physically meaningful global temperature”. There are theoretical reasons why the average temperature of the earth’s surface cannot be measured. Because of the fact that the sun does not shine for half the time, its variability is non linear. It is impossible to simulate it with any of the mathematical functions used by statisticians and even if this were possible there is a variety of possible averages, such as the arithmetic mean, geometric mean, or the harmonic mean.

Hansen  goes on to say that even when you cannot agree on how to measure SAT you can measure the “anomalies” by using models and guesswork!

He even attempts to “guess” the average temperature of the earth as “anywhere between 55º and 58ºF” (12.8ºC to 14.4ºC) for which he gives an unconvincing “global mean” of “roughly 14ºC”, apparently emanating from models. He has no actual evidence.

In an address to the US Congress on June 23rd 1988, James Hansen suggested a solution to the global average temperature problem which made use of temperature measurements from weather stations. The world would be divided into latitude/longitude squares. The average monthly temperature would be obtained from qualifying stations in each square and compared with the average for a reference period. The difference would be a monthly, and then annual temperature anomaly.

This system is now enshrined in the public media as a legitimate means of measuring global surface temperature, but it is nothing of the kind, and no claim that this is so is made by the IPCC. It is called a measurement of “Global temperature anomaly.”

The Fifth Report of the Intergovernmental Panel on Climate Change (IPCC) is about to be launched on the world.

In the first Chapter is the first graph which compares projections of future temperatures from all of the previous IPCC Reports with measurements from the “Mean Annual Temperature Anomaly Record”, including possible errors.

It will be seen that there has been little or no change in their global temperature anomaly for the past 15 years and that current figures are falling below the lowest of the previous estimates.

So there is a “Climate Pause” and “Global Warming” has stopped. This has horrified the IPCC scientists, but it has not reduced their “confidence” that, following Mr Micawber, It will sooner of later “turn up.”

The next graph is even more convincing. Roy Spencer calculated the “projections” from 38 computer models and compared it with temperature measurements from weather balloons and satellites since 1975, which shows that the global temperature has hardly changed for 38 years.

If anybody still has some regard for IPCC ”projections”, the third graph, also from the 5th IPCC Report, shows their success in predicting the concentration of methane in the atmosphere. 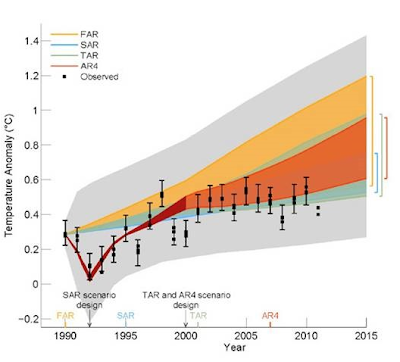 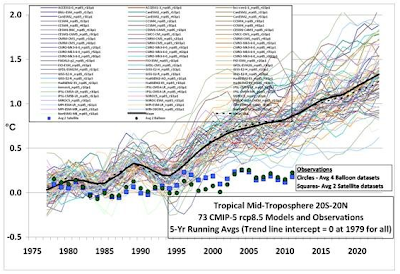 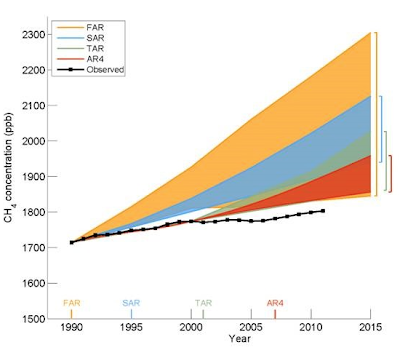