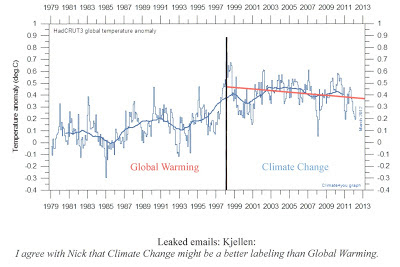 "The fact is that we can't account for the lack of warming at the moment and it is a travesty that we can't."

This is an oft-quoted line by Kevin Trenberth as revealed in the ClimateGate emails.

It seems now, at least to Mr Trenberth a senior scientist in the climate analysis section at the National Center for Atmospheric Research, temperature is not important to Global Warming.


“There are other signs of warming that are abundantly clear,” Trenberth said in an interview. “Those are some of the messages that I think might end up coming out of this report. It’s really strong in areas other than just the global mean temperature or even regional temperatures around the world.”

So, don't worry about the lack of warming, there are factors other than temperature that show the world is warming.....