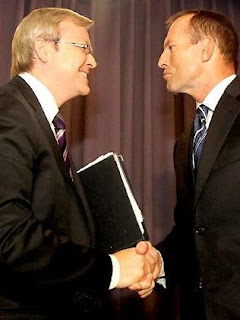 
Now Kevin Rudd is back in the ALP saddle, an ETS is being planned.

I hope readers will remember these points:

Rudd's ETS was previously costed at $500 Billion by 2020;
Abbott's Direct Action will cost $85 Billion by the same date.

Neither will reduce Global temperatures by anything measurable.

In fact the earth's temperature has been stable for 17 years (per satellite measurements) - while CO2 levels have increased from 370 to 400 parts per million. So it is obvious  EXTRA CO2 makes little or no impact on global temperatures.

Therefore reducing CO2 by 5% under an ETS or Direct Action will make absolutely no impact on Global temperatures either.
Both Rudd and Abbott will waste our hard earned tax money on achieving nothing (except a warm fuzzy feeling for a few activists)

If that doesn`t worry you - think about this.

$85 Billion could pay for

And Rudd's ETS plan will instead waste $500 Billion which is nearly six times that much.

Who wants either of them governing without someone else in the senate holding them to account.