Peer Review Not Worth the Papers they were written on.

At last count Retraction Watch has listed 53 papers by Diederik Stapel that have been retracted.

53 Papers, all previously peer-reviewed, have been retracted. However, Retraction Watch notes:


In case anyone’s wondering, Stapel is in no danger of overtaking the current retraction record holder, Yoshitaka Fujii — with 183.

Just between these two fraudsters a total of 236 peer reviewed papers retracted.

There’s not much to say about the badness of a scientist making results up. Science is supposed to be an activity in which people build a body of reliable knowledge about the world, grounding that knowledge in actual empirical observations of that world. Substituting the story you want to tell for those actual empirical observations undercuts that goal. 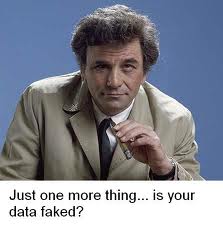 Basically, Stapel would take a hunch and create data to reflect his hunch.


Stapel’s fraud may shine a spotlight on dishonesty in science, but scientific fraud is hardly new. The rogues’ gallery of academic liars and cheats features scientific celebrities who have enjoyed similar prominence. The once-celebrated South Korean stem-cell researcher Hwang Woo Suk stunned scientists in his field a few years ago after it was discovered that almost all of the work for which he was known was fraudulent. The prominent Harvard evolutionary biologist Marc Hauser resigned in 2011 during an investigation by the Office of Research Integrity at the Department of Health and Human Services that would end up determining that some of his papers contained fabricated data.

An unfortunate truth is that "Science" is subsidised by grants and, of course,  as ex CSIRO scientist Dr. Art Raiche explained: "He who pays the piper calls the tune." (Link)


"There are scarce resources, you need grants, you need money, there is competition,” he said. “Normal people go to the edge to get that money. Science is of course about discovery, about digging to discover the truth. But it is also communication, persuasion, marketing. I am a salesman."

When we think of scientific fraud, we must not forget the Alarmist AGW Scientists.

The ClimateGate e-mails revealed that  (From Christopher Booker - link)


they show the scientists trying to manipulate data through their tortuous computer programmes, always to point in only the one desired direction – to lower past temperatures and to "adjust" recent temperatures upwards


This is what Mr McIntyre caught Dr Hansen doing with his GISS temperature record last year (after which Hansen was forced to revise his record), and two further shocking examples have now come to light from Australia and New Zealand.