Closing Down of Ford

Closing Down of Ford 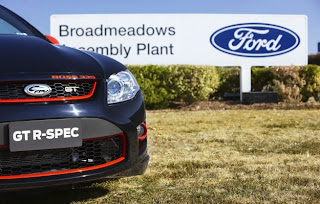 
Nothing could better illustrate the inflexibility of Australia’s system (sic) of workplace relations than the announcement by Ford that it will stop production in 2016.

Why has Ford done this?

There is more than one reason, of course. But Ford rightly drew attention to the high cost of production in Australia. And this is not simply the usual excuse trotted out by the ACTU and unions generally viz the higher exchange rate that has applied but now looks like moving down.

A major problem has been the inability of Australian businesses to negotiate wages and other terms and conditions that allow those businesses to compete internationally.

An important factor in the recovery of the US motor car industry was its ability to negotiate lower wages than had previously been agreed but were clearly out of line with more competitive industries in Japan and other countries.  (emphasis added)
Such a solution was never considered here (or if it was it was discussed behind closed doors). Instead taxpayers have in effect subsidised the wage rates determined by our “fair” award system.

Why wasn’t a negotiation approach considered? The simple answer is that, under the disastrous arrangements for regulating wages and conditions, it would never have been accepted by our so-called Fair Work system – a system that has set wage rates that are unfair to the workers now out of a job.

Nor could the Gillard government have suggested such a process because it is beholden to the union movement.

If Australia is to prevent the decline of our manufacturing industry it is vital that our next government take early steps to allow freedom for employers and workers to negotiate terms and conditions that allow our businesses to compete.