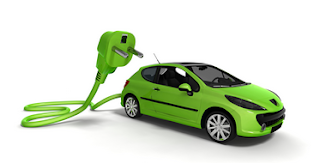 
Consumers remain wary of the cars' limited range, higher price and the logistics of battery-charging. But for those who do own an electric car, at least there is the consolation that it's truly green, right? Not really.

...sure, electric cars don't emit carbon-dioxide on the road. But the energy used for their manufacture and continual battery charges certainly does—far more than most people realize.

A 2012 comprehensive life-cycle analysis in Journal of Industrial Ecology shows that almost half the lifetime carbon-dioxide emissions from an electric car come from the energy used to produce the car, especially the battery. The mining of lithium, for instance, is a less than green activity. By contrast, the manufacture of a gas-powered car accounts for 17% of its lifetime carbon-dioxide emissions. When an electric car rolls off the production line, it has already been responsible for 30,000 pounds of carbon-dioxide emission (13.6 metric tons). The amount for making a conventional car: 14,000 pounds(6.3metric tons).

And then, of course, the Electric cars still have to recharge their batteries with, as Lomborg writes - "electricity overwhelmingly produced with fossil fuels."


Thus, the life-cycle analysis shows that for every mile driven, the average electric car indirectly emits about six ounces of carbon-dioxide. This is still a lot better than a similar-size conventional car, which emits about 12 ounces per mile. But remember, the production of the electric car has already resulted in sizeable emissions—the equivalent of 80,000 miles of travel in the vehicle.

Lomborg writes that Clover's Nissan Leafs only have a 73 mile (117 kilometre) range and then need 6 hours to recharge.


To make matters worse, the batteries in electric cars fade with time, just as they do in a cellphone. Nissan estimates that after five years, the less effective batteries in a typical Leaf bring the range down to 55 miles. (88k)