Paul Howes and THAT promise

Posted by Geoff on March 11, 2012
As reported by this blog, Paul Howes initially promised: "If one job is gone, our support is gone."
He then back-tracked, or appeared to back-track on that promise.

Meanwhile jobs have been disappearing even before the tax has hit the fans. Unions members are agitating. Has Mr Howes re-invigorated his promise? 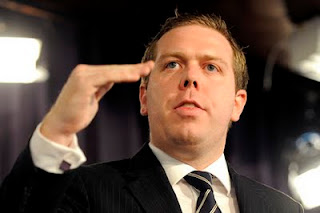 According to Dennis Shanahan in the Australian:


THE Gillard government has been warned that union support will be withdrawn from Labor's campaign to put a price on greenhouse gas emissions if it looks like "one job" will be lost because of the proposed carbon tax.
Australia's biggest manufacturing union has called on the government to urgently release details of its protection for industry and householders under a carbon tax, in the face of a growing workers' revolt on the workshop floor, where union officials are being challenged and jeered for supporting Julia Gillard's plan.
As Australian Workers Union national secretary Paul Howes prepared for a crisis meeting of union officials today to discuss the impact of the carbon tax, he said his union wanted to ensure that "this carbon price won't cost a single job".

Why has Paul Howes done a double back-flip?


But workers' concern about job losses has reached such a critical level that union leaders are warning the government their support is conditional on a more effective political campaign to sell the tax, details of industry protection and guarantees no jobs will be lost.
Mr Howes has this week joined business leaders who believe that there should be greater levels of compensation than those offered in 2009 under the Rudd government's carbon pollution reduction scheme and those on offer now.