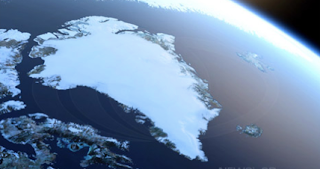 A peer  reviewed study to determine - for Greenland - how much warming is caused by increasing atmospheric greenhouses gases and how much is due to natural variablilty.

What was done
In the report of the study they designed to obtain this needed knowledge, Kobashi et al. say they reconstructed "Greenland surface snow temperature variability over the past 4000 years at the GISP2 site (near the Summit of the Greenland ice sheet) with a new method that utilizes argon and nitrogen isotopic ratios from occluded air bubbles."

What was learned
The eight researchers report that the average Greenland snow temperature over the past 4000 years was -30.7°C, while the current decadal (2001-2010) surface temperature at the Greenland Summit is -29.9°C, which they say is as warm as it was there in the 1930s-1940s. And they add that "there was another similarly warm period (-29.7°C) in the 1140s (Medieval Warm Period), indicating that the present decade is not outside the envelope of variability of the last 1000 years." And, even more telling, prior to the last millennium they report "there were 72 decades warmer than the present one, in which mean temperatures were 1.0 to 1.5°C warmer." In fact, they found that "during two intervals (~1300 BP and ~3360 BP) centennial average temperatures were nearly 1.0°C warmer (-28.9°C) than the present decade."

What it means
Clearly, there is nothing unusual, unnatural or unprecedented about Greenland's recent relative warmth, as it is clear that much warmer temperatures have been experienced there over many prior prolonged periods without any help from anthropogenic greenhouse gas emissions. Hence, there is no valid reason to believe that mankind's burning of coal, gas and oil has had, or is having, any measureable impact on the climate of that part of the world, or any other part of the planet.


Nothing to see here, move on, IPCC!

Another Beautiful Day In Greenland (From Real Science)