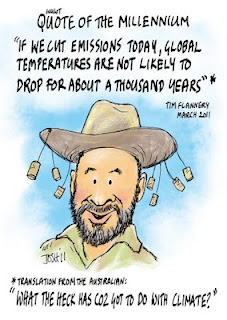 If any honourable person had been as wrong as Tim Flannery, had cost governments as much in worthless investments as Tim Flannery, they would have apologised, resigned and paid back the salary received under a bundle of lies.
Chief Climate Commissioner Desalination droughts The Weathermakers Re-examined Tim Flannery Warragamba Dam