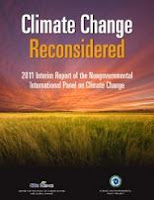 No “Climate Debt” is owed to developing countries

Ottawa, Canada, December 11, 2011: “Developed nations are not guilty of causing the climate change that developing nations claim they are suffering,” said Tom Harris, executive director of ICSC which is headquartered in Ottawa, Canada. “Climate changes all the time—both warming and cooling—due to natural causes, and there is nothing that we can do to stop it. However, to the degree possible, and considering our economic circumstances, developed nations still have a moral obligation to devote a proportion of their foreign aid to helping the world’s most vulnerable people adapt to natural climate events.”

ICSC chief science advisor, Professor Bob Carter of James Cook University in Queensland, Australia, and author of the best selling book, “Climate: the Counter Consensus” says, “Science has yet to provide unambiguous evidence that problematic, or even measurable, human-caused global warming is occurring. Consequently, any agreements—Durban, Cancun, Copenhagen or Kyoto—to reduce humanity’s greenhouse gas [GHG] emissions are utterly futile. Governments need to recognize that the really dangerous climate hazards are natural events and change, and to prepare more fully to adapt to them when they occur.”

New Zealand-based Terry Dunleavy, ICSC founding chairman and strategic advisor, expands on this point: “The UN’s nonsensical attempts to ‘stop climate change’ have diverted world attention, and hundreds of billions of dollars, away from helping those already being hurt by natural climate variation and weather-related events. The health and wellbeing of people suffering today is infinitely more important than the remote possibility that our GHG emissions might threaten those yet to be born.”
"We urge citizens from across the political spectrum to take a more mature perspective, one that is based on real science, engineering and economics, not political correctness,” asserts ICSC energy issues advisor, Bryan Leyland of Auckland, New Zealand. “Whether you are socialist or capitalist, industrialist or environmentalist, no one wants to pour money down the drain. Yet, that is exactly what is happening as a result of the global warming scare. Expensive and ineffective alternative energy projects such as wind turbines and solar cells are receiving massive government support, in the belief that they will reduce GHG emissions which are wrongly blamed as a cause of dangerous global warming. Meanwhile, the conventional power sources that we rely on for our very survival, let alone the economic progress we need to create a better world, are deliberately starved of support. This is a very dangerous situation.”

ICSC science advisor Professor Ole Humlum, of the Institute of Geosciences, University of Oslo, explains, "Today’s climate debate is essentially about the relative influence of human-produced carbon dioxide (CO2) versus natural climate variations. In my mind, there is no doubt that the data available clearly show that the natural variations are the dominant of these two factors, including during the last few years. The net temperature effect of our CO2 emissions appears to be insignificant.”

Mr. Harris concluded: “As is well demonstrated by the Nongovernmental International Climate Panel on Climate Change [www.nipccreport.org], warming alarmism is a not based on a correct interpretation of the science. The climate scare has largely been fuelled by computer-generated misrepresentations that bear little relationship to modern climate or to its observed history.”
As nearly all independent observers have now concluded, a new approach is needed to address climate change. The best (indeed, self-evident) Plan B is that nations should prepare for and adapt to the onset of damaging climate-related events and change as and when they occur.