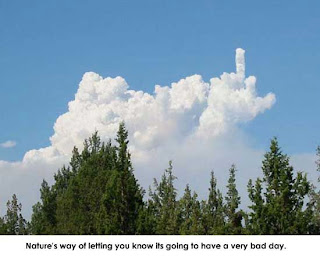 Fairfax Journalist Phillip Coorey has written a piece in the Fairfax press today.
The Headline:

In my humble opinion, Phillip, the latter option (never happen) would be greatly applauded.

Phillip, I know that you are only reporting her words, but how can you justify reporting:

If businesses in Australia are hampered by extra costs by a tax on CO2 (why do Fairfax editors constantly show images of water vapour coming from cooling towers when they are talking of colourless CO2 emissions?) they will have three courses of action depending on the pain level.
You report our PM saying


"Tony Abbott, with his direct-action plan to pick polluters and pay them from the budget to cut emissions, ''will cost this nation jobs'' because there would be no incentive to develop new, clean technologies."

This is in contrast (?) to her statement:


Ms Gillard said emissions-intensive industries which have competitors in countries no carbon price exists needed assistance to help with the transition. She said there would still be an incentive for industries to reduce emissions and jobs would be protected.

I got a real laugh out of this bit -

Ms Gillard said human-induced climate change was real and opinion polls could not change that. ''I ask, who would I rather have on my side?'' she said. ''Alan Jones, Piers Akerman and Andrew Bolt?
''Or the CSIRO, the Australian Academy of Science, the Bureau of Meteorology, NASA, the US National Atmospheric Administration, and every reputable climate scientist in the world?''

Human induced climate change is real? Well, certainly is as far as the Urban Heat Island Effect is concerned. As to the rest, although the IPCC assessment reports say "likely" and "highly possible" there is no causal link that rising temperatures are caused by anthropogenic  CO2  emissions.
There is however scientific evidence that rising temperatures cause atmospheric CO2 levels to rise. See link

Who would I rather have on MY side?

At Cancun, Climate Change Minister Greg "The seas will rise and inundate us, THAT's why I bought a waterfront residence out of my electorate" Combet reported on The outcome achieved at Cancun including:
So, where will Australia's money for the New Green Climate fund come from:

Billions of dollars raised by Australia's carbon tax will end up overseas, helping poor countries battle climate change.
Prime Minister Julia Gillard's new tax will be used to allow Australia to meet its share of a $100 billion-a-year United Nations fund to transfer wealth from rich countries to help undeveloped nations adapt to global warming.
The Gillard Government is party to a UN agreement which Climate Change Minister Greg Combet entered into in December at a meeting in Cancun, Mexico, under which about 10 per cent of carbon taxes in developed nations will go into a Green Climate Fund.

Just have a look at a scientist, Berkeley's Richard Muller talking about the IPCC climategate cabal. It will take you only five minutes - find out why he says:


As a scientist, I now have a list of people whose papers I won't read anymore. You're not allowed to do this in science. This is not up to our standards.