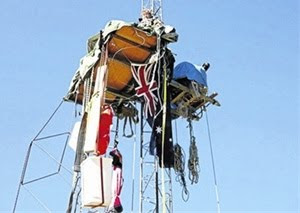 From The Canberra Times 16/12/09 by John Thistleton

Hot, desperate and angry, Peter Spencer has a strong voice for a man who hasn't eaten in 23 days.

He's on a hunger strike, perched on a wind-monitoring mast on his Shannon's Flat property north of Cooma.

He won't come down until Prime Minister Kevin Rudd admits the Australian Government owes farmers like him $100 billion for capturing carbon in their soil.

Dangling from his wooden platform 10m above the ground, he looks like another lunatic in the climate change circus.

Except Mr Spencer is a resourceful businessman and farmer supported by a formidable legal team headed by Sydney barrister and one-time Malcolm Turnbull rival, Peter King.