There IS NO correlation between CO2 and temperature; Another SS "Myth" debuked

Another debunking of one of UNSkeptical UNScience -SS's- so-called "Myths." This time debunking their #46

Although SS says: "There is long-term correlation between CO2 and global temperature," implying that man's CO2 emissions are causing the falsified CAGW hypothesis, Joanne Nova has graphed the Vostok Ice Core data which show that Carbon dioxide levels follow temperature changes with an 800 year lag;

The bottom line is that rising temperatures cause carbon levels to rise. Carbon may still influence temperatures, but these ice cores are neutral on that. If both factors caused each other to rise significantly, positive feedback would become exponential. We’d see a runaway greenhouse effect. It hasn’t happened. Some other factor is more important than carbon dioxide, or carbon’s role is minor.

First -see #45 - here. Plus an interesting post by David Stockwell following on from Beenstock’s 2 papers. (see below)

Basically temperature and CO2 are different statistically which means there is limited correlation between them. 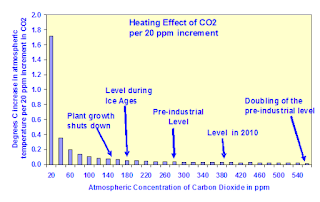 When you combine that with the logarithmic decline of the effect of CO2 on temperature (see no. 30 here) you can comfortably say at the very most the correlation between CO2 and temperature is effectively finished at concentrations well below the current level of CO2.

Michael Beenstock and Yaniv Reingewertz
Because the greenhouse effect is temporary rather than permanent, predictions of significant global warming in the 21st century by IPCC are not supported by the data.


M. Beenstock, Y. Reingewertz, and N. Paldor
We have shown that anthropogenic forcings do not polynomially cointegrate with global temperature and solar irradiance. Therefore, data for 1880–2007 do not support the anthropogenic interpretation of global warming during this period.