The Logarithmic Effect of Carbon Dioxide. Well, what the heck does that mean? To this burnt out old Rock and Roller it means that the worst warming has been done and that warming was done long, long ago. Look at this graph prepared by David Archibald:
For WUWT, David wrote :


The greenhouse gasses keep the Earth 30°C warmer than it would otherwise be without them in the atmosphere, so instead of the average surface temperature being -15°C, it is 15°C. Carbon dioxide contributes 10% of the effect so that is 3°C. The pre-industrial level of carbon dioxide in the atmosphere was 280 ppm. So roughly, if the heating effect was a linear relationship, each 100 ppm contributes 1°C. With the atmospheric concentration rising by 2 ppm annually, it would go up by 100 ppm every 50 years and we would all fry as per the IPCC predictions.

But the relationship isn’t linear, it is logarithmic.

Lo and behold, the first 20 ppm accounts for over half of the heating effect to the pre-industrial level of 280 ppm, by which time carbon dioxide is tuckered out as a greenhouse gas. One thing to bear in mind is that the atmospheric concentration of CO2 got down to 180 ppm during the glacial periods of the ice age...

Plant growth shuts down at 150 ppm, so the Earth was within 30 ppm of disaster. Terrestrial life came close to being wiped out by a lack of CO2 in the atmosphere. If plants were doing climate science instead of us humans, they would have a different opinion about what is a dangerous carbon dioxide level.

Yes, carbon dioxide is of limited potency and waning influence as its concentration increases.


Carbon dioxide is a potent greenhouse gas for intercepting radiation across specific portions of the infrared spectrum, notably at wavelengths around 14.8 μ and 9 μ. Initially, at low atmospheric concentrations, the gas therefore has a strong greenhouse effect as it intercepts outgoing radiation at these wavelengths. However, the narrowness of the spectral intervals across which carbon dioxide intercepts radiation results in a rapid saturation of its effect, such that every doubling in the concentration of carbon dioxide present enhances the greenhouse effect by a constant amount.This is reflected as the negative logarithmic relationship that actually exists between extra carbon dioxide and the warming that it causes 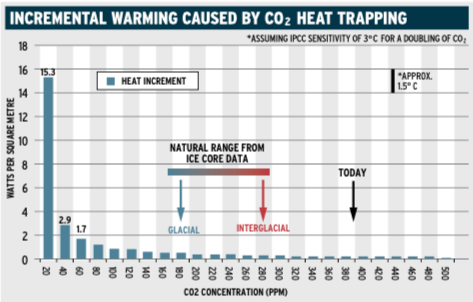 so the first 60 ppm produces a strong cumulative radiation forcing of 19.9 W/m2

This pattern continues as one moves across the figure to the right, such that even at the relatively impoverished carbon dioxide level of 180 ppm that marked recent glacial episodes, more so at the 280 ppm level that marked the pre-industrial atmosphere and even more so at today’s 390 ppm, further 20 ppm increases in carbon dioxide produce only a tiny (0.2 W/m2, and successively lessening) amount of extra radiation forcing.

Given where Earth’s atmosphere sits on the scale today (at 390 ppm), it is apparent that further increases in carbon dioxide will produce only very small increases in radiation forcing and thus global warming. Regarding the much- feared doubling of the pre-industrial level (i.e. an increase from 280 to 560 ppm), and noting the decreasing radiation forcing inherent in the logarithmic relationship (Fig. 16, p.103), at 390 ppm the Earth has already realised nearly 50% of the additional radiation forcing and anthropogenic warming that will be induced by a full doubling of carbon dioxide from pre-industrial levels.

Given the importance of the less-bang-for-every-additional-buck nature of the relationship between increasing carbon dioxide and extra warming through radiation forcing, it is extraordinary that an explanation of the matter is almost entirely absent from the public debate. Even if all of the up to 0.8ºC warming that occurred in the 20th century were to be attributed to carbon dioxide (an unsubstantiated and highly contentious proposition in itself), the relationship implies that a full doubling of carbon dioxide over pre-industrial concentrations will produce under 1ºC of future additional warming. Further, if the concentration were to double again to 1120 ppm, the additional global temperature increase would be less than another 2ºC.

So, although organisations like 350.org want to reduce the amount of CO2 in the atmosphere from its current level of 400 parts per million to below 350 ppm, their aim is actually anti-science. The current level of carbon dioxide is re-greening the planet. 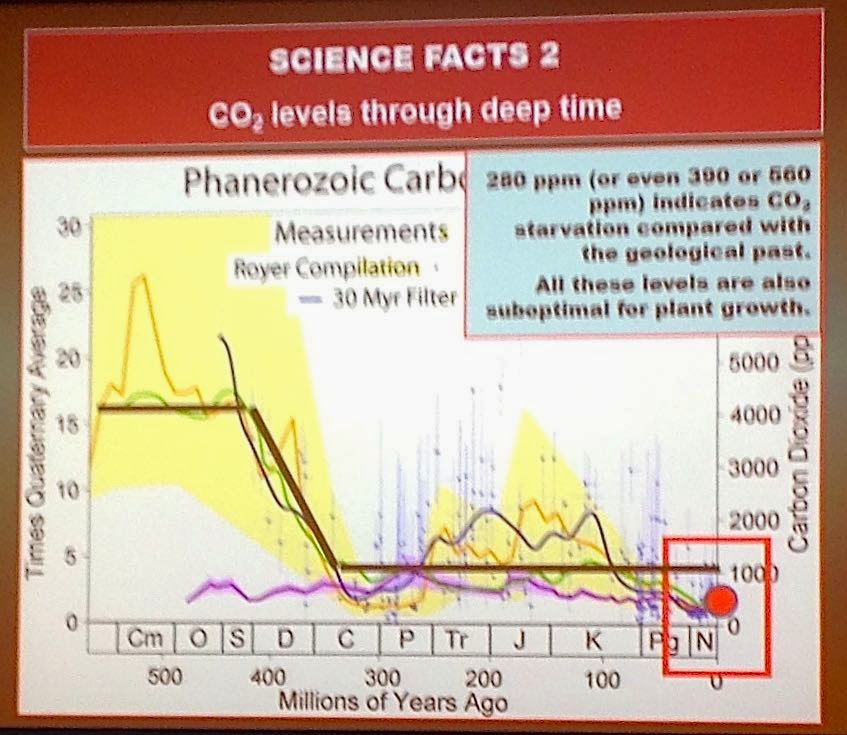 Professor Carter, in his series of addresses promoting the IPA's  CLIMATE CHANGE: The Facts 2014 talked of CO2 levels through deep time and some of the Myths of Climate Change (See Myth 6 - Further human addition of CO2 to the atmosphere will cause dangerous warming, and is generally harmful.) noted two of the myths of climate change: