More Heat about Ocean Heat - another nail in the AGW coffin

I have previously written about the fact that the heat in the ocean isn’t there. A Facebook commentator produced some excellent graphs based on the ARGO data which showed NO heat accumulation at any level in the world’s oceans. This lack of warming contradicts completely  (Anthropogenic Global Warming) AGW theory as put forward by such AGW stalwarts as Trenberth and England. It also has Hansen scrambling for weird and whacky explanations.

So it is plain in the ARGO era that the oceans are not warming and this contradicts AGW.

In my articles I noted that NODC graphs were shown in joules which allowed a steeper slope compared to a temperature trend. Mischievously I suggested an ulterior motive for this. Alarmism.

Another blogger has taken me to task. Rob Ryan has defended the NODC graphs and pointed out that they do indeed have temperature graphs. Indeed they do: 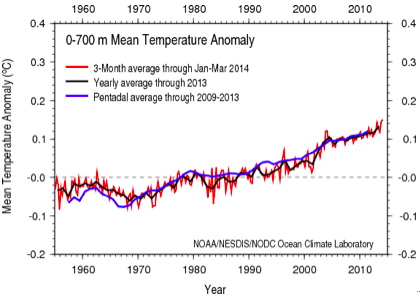 Thanks Rob. By way of comparison here is the same graph in joules: 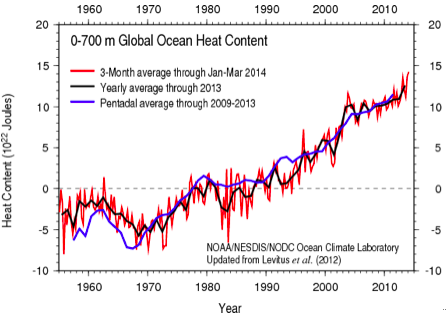 Well to me the trend slope in the joules graph looks steeper and more alarming than the temperature graph. But Rob doesn’t like OHC as a measure of the energy; it is poor terminology according to Rob. Hey Rob, don’t blame me, argue with NODC and indeed AGW in general; they’re the ones using and relying on it.

What really is poor is the notion that by any measure the oceans are heating. The estimable Bob Tisdale does a comparison of all OHC measures and produces this graph: 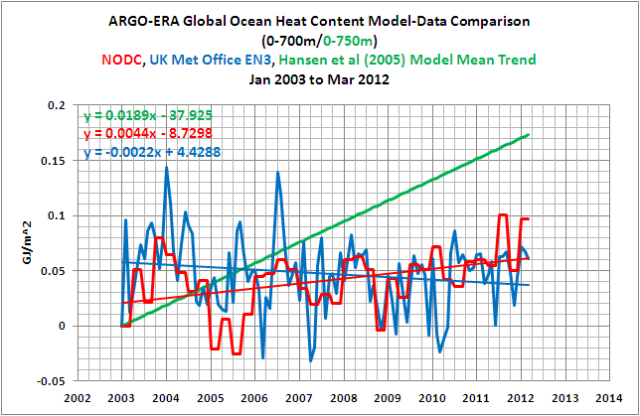 Plainly Hansen’s model on behalf of AGW is off with the pixies while the MET and the NODC show the opposite trend!

A couple of things about this.

Firstly the ARGO data is adjusted before it is presented. Obviously NODC and the MET adjust it differently. In fact in another post Bob Tisdale examines the NODC adjustment procedure: 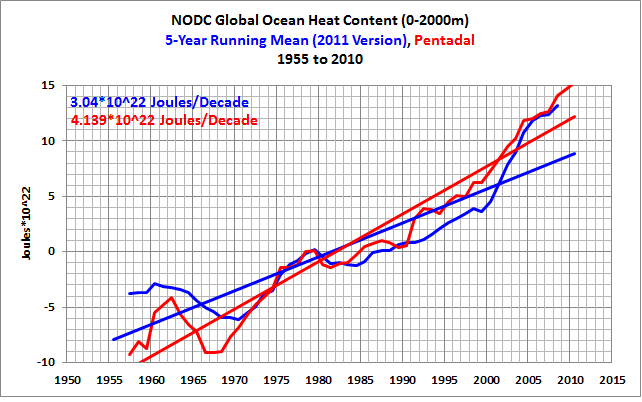 At the 700 meters range NODC have increased the trend by 19%. The NODC adjustments increase the trend at 2000 meters by 36%!

Secondly the ARGO data, even though it is the best we have ever had, is vastly insufficient. Willis Eschenbach notes: 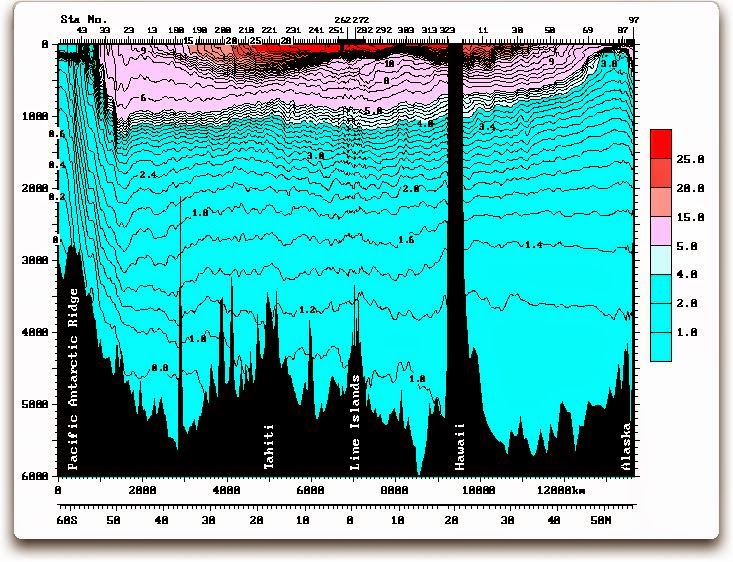 Figure 3 (Figure 10 from cited source.) North/South Pacific transect at 150°W.  ORIGINAL CAPTION: Vertical section of potential temperature (°C) along 150°W from data collected in 1991-1993 as part of the World Ocean Circulation Experiment. Data north of Hawaii were collected in 1984 (Talley et al., 1991). Potential temperature is the temperature a parcel of water would have if moved to the sea surface with no change in heat content, and is lower than measured temperature since temperature increases when water is compressed due to the high pressure in the ocean.Source and Image

The Argo floats operate mostly in the warmer area up top of Figure 3, above the lower thermocline (light blue). Average depth in this entire transect is much deeper than that, about 5,000 metres. So the Argo floats are measuring less than a quarter of the water in this part of the Pacific basin. Makes the whole question of oceanic heat content kinda iffy.

Kinda iffy is a vast understatement! The ARGO floats don’t even go to 2000 meters and yet we have temperature profiles at that depth.

The only reasonable conclusion is that based on the best data from ARGO the oceans are not warming, whether you are considering joules or temperature.

Thanks again Rob; by my reckoning that is another nail in the AGW coffin.
Posted by Geoff on July 15, 2014