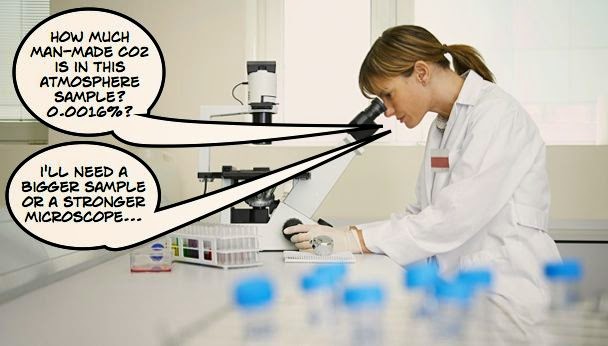 How logical  does this sound? The atmosphere got warmer because it had a miniscule 0.04% CO2. The same people pushing the warming alarm talk about "Solar Energy;" talk about having solar panels collect energy from the Sun to create power.

Can you imagine, in a hundred years time, what they will think when people look at their history books and see the alarmists' alarm over a tiny 0.0016% of the atmosphere that was meant to cause dangerous warming. Will they believe it? Would YOU?

But wait! There has been NO significant global warming for 18 years. Doesn't that completely blow away the theory?

No, the alarmists, not to be denied their alarm, have come out with an extension to their exceptional theory. The heat has scampered out of the atmosphere and scurried into the ocean. Seems it has managed to get through the surface without warming it and gone into deep cover. Now that's deep!

But wait! The Argo buoys haven't detected it. If it's not down, deep down....

The IPCC have sent out the Global Regeneration of Enlightenment Numismatists (GREENs) to find the missing heat.


Forecasts have said the temperature should be ever increasing, yet actual observations proved that nothing has happened. Yet since the Science is settled, therefore the temperatures must have really gone up even though nobody has seen it—it must be that Global Warming has gone missing.

Communications experts know that if we are to restore the panic and dread which is necessary to create change in democracies, we have to find that missing Global Warming. The IPCC has thus dispatched several international teams of experts and charged them not to return without it.