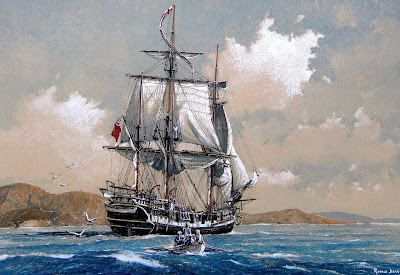 Until the middle of the 19th century everybody believed that the earth was static and unchanging, interrupted by earthquakes, hurricanes and other disasters, caused, usually by Gods, but after which the earth returned to its original static state.

It was the developments of the science of geology by Hutton and Lyall that changed this picture. They showed that the earth is in a constant state of change. Many of the rocks are formed from deposits made in previous history. In addition they contain remains of organisms that had lived at the time they had been deposited,

Charles Darwin, who joined captain Robert Fitzroy in a voyage around the world in HMS Beagle in 1831, was an enthusiastic naturalist who had also studied the new geology. He took the first volume of Lyall’s “Principles of Geology” with him on the voyage and picked up the second volume at Valparaiso during the trip.

It became obvious to him that the remains of early living organisms in geological strata were often very different from those alive today, so there must be an evolutionary change over time.

The concept of “Climate Change” promoted by The Intergovernmental Panel on Climate Change (IPCC) denies the existence of evolution. They believe in the old Medieval concept of an unchanging static world, affected only by “Natural Variability”which can only be “changed" by human greenhouse gas emissions.

Evolution of living organisms means their ever changing interaction in every place at every level, This process was called “Ecology” by Ernst Haeckel.

Environmental “Ecologists” treat the whole world as a collection of static “ecosystems;” regions where the organisms are uniformly distributed. They believe that there is a moral virtue in their largest possible variety; in “biodiversity.” Both these concepts are unknown to evolutionary theory.

Evolution is also diametrically opposed to the concept of “sustainability”. Evolution happens, it cannot be stopped  or reversed. The only sensible policy is adaptation.

Darwin tried to find a cause for the changes in living organisms over time. He had noticed that  the offspring of  many organisms were often not identical with one another and also too numerous for all of them to survive. The next generation would consist of those who were more successful in coping with their current, changed circumstances; the “survival of the fittest”. Each generation would be different from the last one and over sufficient time would explain the observed changes.

Darwin was unable to explain how it worked. Now we know that the mechanism is controlled by genetic changes in the DNA of each organism.

The evidence that organisms evolve and that the mechanism is selection of favourable genes is overwhelming and most professional biologists purport to agree that this is so and routinely honour the memory and work of Charles Darwin. But very few are prepared to accept the full implications of these two theories.

Darwin himself was unwilling to accept some of them and his mistakes have been subsequently copied by many others.

Darwin had a degree in theology and had prepared for service as a country parson. His wife was an enthusiastic Christian who worried that her husband was losing his faith.

Darwin struggled all his life with this dilemma and it was only in his last work, his autobiography, that he tackled it head on and confessed that he was “agnostic”, which means that he was not sure, despite the certainty of his theories.

His confession so horrified his family that they censored his autobiography. His true opinions were only made known when the uncensored book was published by his granddaughter Nora Barlow as late as 1958.

A belief in some form of religion is part of the emotional apparatus which binds humans to their particular society. Even many scientists try to make the excuse that religion can be an explanation for that part of their knowledge of which they are ignorant. Thus preventing further research.

Darwin’s second mistake was to assume that humans were in some ways different from all other organisms. He expressed this difference by the very mechanism of evolution, of SELECTION.

The process of selection from a set of offspring contending for survival can cover the spectrum of complete accident (such as the luck to survive a disaster) to deliberate measures to obtain an advantage. There is no need for a distinction between different organisms. Yet Darwin chose to make a distinction between NATURAL SELECTION and ARTIFICIAL Selection. Implying that Darwinian selection carried out by humans is different or superior to selection that occurs with non humans.

The Environmental Movement goes way beyond this departure from evolutionary science by claiming that humans are not only superior to other creatures but are also responsible for them.

Darwin went to a great deal of trouble to explain that the hierarchical classification system which is used to classify organisms, is arbitrary, based on personal opinions of taxonomists.

In his most influential book “The Origin of Species” he showed that the particular classification level “species” is not the sacred unchanging category believed by the originator of the term Carl Linnaeus but it depends entirely on what characteristics are chosen to distinguish one species from another. The choice may be different for different groups of organism in different periods and places and it can even depend on similarities  of DNA instead of physical characteristics.

Environmentalists regard every organism that at one time or another has been given a species name by a taxonomist as sacred. It must never be permitted to evolve or become extinct, but must often be considered as “endangered”, preserved forever, or “conserved”.