CO2 is good for you: And good for Giant Pandas, too/ 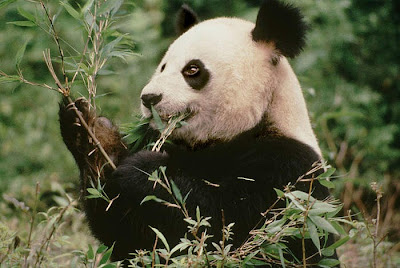 We have recently had many reports that the rising atmospheric CO2 is increasing the biomass; helping with increasing food supplies for man and beast.


Now we find a new study from China where the authors note that dwarf bamboo (Fargesia rufa Yi), which grows in the understory of subalpine coniferous forests in China, is one of the main foods of the giant pandas that live there and they wondered how the ongoing rise in the atmosphere's CO2 concentration might impact these small bamboo plants.

As reported by CO2 Science (link)

What was done
Seeds of the dwarf bamboo plants were collected and sown in seedbeds where the resultant seedlings were allowed to grow for four years, after which healthy seedlings of a uniform size were transplanted into 120 20-L pots filled with surface soil taken from the natural forest floor. Then, starting in May of 2010, the planted pots were placed within eight enclosed-top growth chambers constructed from materials having a transparency of 85% (walls) and 82% (tops), where they grew until the end of the study in September 2010 in air of either ambient or double-ambient CO2 and either ambient or ambient +2.2°C temperature, while numerous measurements were made on the young trees over the course of the 150-day experiment.

What it means
In the concluding paragraph of their paper, Li et al. write that the dwarf bamboo plants could adjust their "physiology and morphology to enable the capture of more light, to increase water use efficiency and improve nutritional conditions." However, they also indicate that elevated temperature had just the oppositeeffects on water use efficiency and nutritional traits of leaves. But in the end, they report that "the combination of elevated CO2 and elevated temperature showed no significant interaction effect on the nutritional traits of leaves." And, therefore, their ultimate conclusion was that if and when "the dwarf bamboo confronts warmer climate for a long term, elevated CO2 will be beneficial," as it will lead to the production of more equally-nutritious dwarf bamboo tissue.