Australian Climate Sceptics Blog
Pls feel free to circulate or publish this comment and the detailed plans provided on any media. 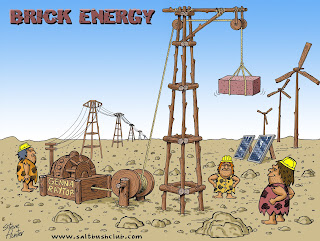 The Australian Snowy 2 hydro scheme plans to use electricity to pump water uphill to get some of that energy back by running the water downhill again.

Some Australian mining companies are planning a dry version of Snowy 2 - a huge brick-powered battery using the force of gravity to drive a generator when solar and wind energy are on strike.

Each unit of this brick-powered battery would comprise a 30 storey tower enclosing a 35 tonne brick which is hauled up using surplus renewable energy (around noon on any clear windy day) and then released to turn generators when there is no renewable energy being produced (every still night or calm cloudy day).

For a detailed diagram on how it will all work see above or link below:
https://saltbushclub.com/wp-content/uploads/2021/03/brick-power.jpg

These flint-stone miners will also have to replace all diesel mining equipment with electric machines, then build enough wind/solar generators to not only run the mine, but also to elevate the giant bricks. The country for miles around will be plastered by solar panels, wind turbines, power lines and roads. They must then build the brick-powered generators. This expensive conglomeration would be lucky to recover 50% of the energy used to create and charge it. Few mines could afford to fund all this nonsense. Shareholders can expect nothing except dividends of used bricks, but someone will benefit from increased demand for electric mining machines, copper and other metals. And foreign producers of wind turbines and solar panels will get richer.

(Prudent mine workers should demand a diesel generator and fuel in every ventilated crib room.)

It would be better and quicker to buy a portable nuclear power plant and get reliable smoke-free 24/7 power.

Viv Forbes has tertiary qualifications in Applied Science and Financial Analysis, and long experience in mine economics, management and financing.

For those who think our mining leaders could not be so stupid, see this reference:
Technological Revolution to power miners:
“The Australian” 2/3/21