Rick is a geologist. Here is his explanation of ocean temperature which the models are getting wrong.

The Niño34 region of the Pacific is an important region for forecasting weather around the Pacific rim countries.  The east coast of Australia has been experiencing the good and the bad of the current La Nina phase.  Australia is currently in the “flooding rains” stage that Dorothea M. observed more than a century ago.

The attached charts provide comparison of climate model output with the measured NOAA/NCEP data; a combination of satellite measurements interpolated with data from moored buoys.

I have only two climate models per chart to avoid clutter.  The four modelling groups are:

All models show similar significant warming trend where there is no measured trend.  In most cases the models cool the past to an absurd degree to sustain the warming trend.  The GISS output is the only model that aligns with the 1980 measure temperature so is now well above the measured.

One of the snippets I have got from the KNMI site is that most models have a contact email so I have been sending the respective chart to the nominated model expert asking why the models produce such poor results for this important region. 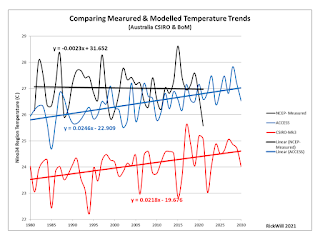 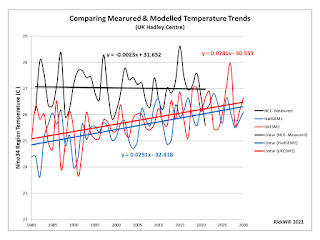 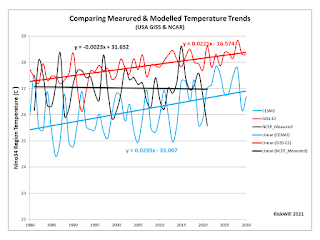 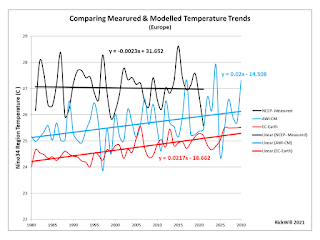