Monash University has what is best described as a climate change propaganda hub.

"Climate Communicators is the MCCCRH's flagship program and produces simple, long-term climate graphics for Australian weather presenters. By detailing city-level climate trends in a simple format, the program is building an understanding of the local implications of a global phenomenon. And with television remaining the single largest source of news and weather for Australians, it reaches hundreds of thousands of people with each broadcast.” 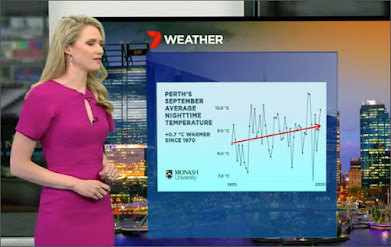 The Monash graphic uses ACORN 2 average minimum temperatures for Septembers at Perth Airport since 1970. You can see that with a red trend line overlay of ACORN 2 temperatures below … 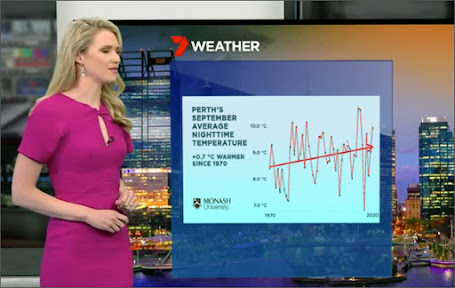 But ACORN 2 cooled Perth Airport September nights by about 0.6C from 1970 to 1997, as can be seen below with a RAW temperature overlay … 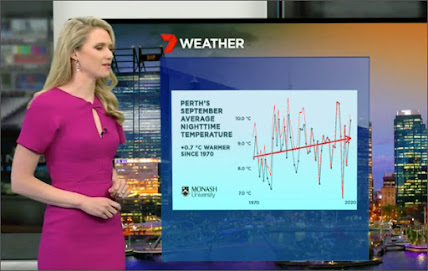 And back in the 1970s and 1980s, Channel 7’s weather department faithfully reported September minimum temperatures from the Perth Regional Observatory in Wellington St, East Perth, as shown in the overlay below … 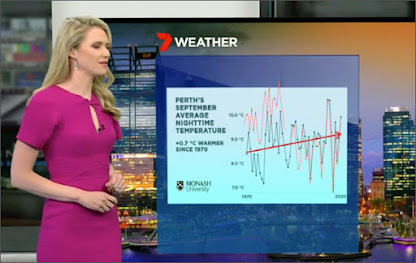 ACORN 2 actually uses Perth RO/Observatory temperatures from 1910 until the airport opened, and cooled 1910-19 September nights at Perth Observatory by about 1.7C.

It all leaves you wondering why the Monash climate change propaganda hub needs to be producing these graphics and why TV weather presenters can’t go to the BoM website and use their graphics.

Might it be that TV weather presenters would use BoM charts based on original RAW temperatures instead of the adjusted ACORN temperatures that leave viewers sweating on the belief that because of CO2 and climate change, it’s much hotter now than 50 years ago?