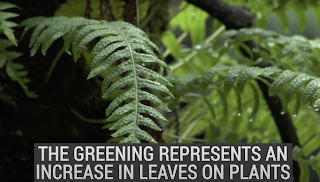 Gee, who would've thunk it? NASA admitting that Rising CO2 levels are GREENING the Earth!!

"From a quarter to half of Earth’s vegetated lands has shown significant greening over the last 35 years largely due to rising levels of atmospheric carbon dioxide, according to a new study published in the journal Nature Climate Change on April 25."