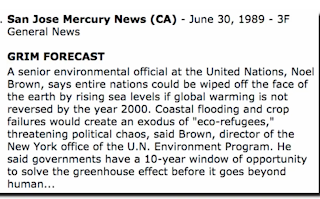 Noel (no relation {i hope}) Brown in June 1989 said that governments "have a ten-year opportunity to solve the greenhouse effect..... coastal flooding and crop failures could create an exodus of "eco-refugees"

Only two days to go!

How are you feeling, alarmist Noel!

I was sure someone would point out that the forecast was for the year 2000 and not 2020.

The story behind climate alarmism 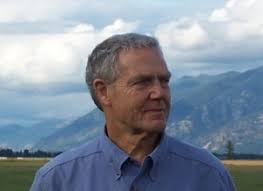 
I was 4 years old when they told me.

It scared me. It really scared me.
It must have been in the news that day because the adults were talking about it. The sun was going to flame out!
I was old enough to understand the sun was very important to my life. “When is the sun going to stop shining?” I asked my parents.
They told me I should not worry about the sun dying because it still had a billion years or so to live. But a “billion years” meant nothing to me. My time scale was only now until my next birthday, and now, I thought, I am not going to make it to my next birthday.
I recovered from my scare before my next birthday because the adults told me not to worry about the sun dying. It was not going to happen in my lifetime.
But today, adults tell children our carbon dioxide emissions are going to end life on our planet in 6 to 12 years. That the world will end before they grow up. Then their elementary school teachers, high school teachers, and college teachers tell them.
These kids grow up to be zombies. They have been told lies. They have been indoctrinated. Their minds are, maybe, permanently warped to reject all evidence that shows our carbon dioxide emissions do not cause dangerous climate change. They may as well be connected to Star Trek’s BORG. Their minds are wired to their controllers.
Fear is the greatest motivator. When humans accept a belief because of fear, sometimes they cannot recover. They can’t comprehend evidence that their fear is not warranted. Fear supersedes logic.
Witch doctors, tribal leaders, and “fire and brimstone” preachers learned that a long time ago. To control the people, instill fear in the people.
Today, we have two generations of people who have grown up with the belief that human carbon dioxide emissions cause serious climate change.

The importance of the philosophy of science

Robert wrote to me on December 21,

I just discovered your webpage. Professor Kemeny would have been delighted. I took his philosophy of science course in 1964 with 6 other students. He sat on the corner of a desk and mesmerized me. I have treasured my copy of his book, “A Philosopher Looks at Science”.

I cannot understand the current popular deviation from scientific principles by such as Michael Mann and his pack. How can our society draw real scientists back into the search for truth when grants are awarded only to alarmists or to those who propose programs that destroy our progress in harnessing economical energy?

Climate alarmism is born of politics, not science.

From the first Earth Day on April 22, 1970, to the Earth Summit in June 1992, climate alarmism was born and raised in politics.
Maurice Strong’s lifetime goal was to transform the UN into a world government. He founded the UN Environment Programme (UNEP). He argued that rich Western countries had benefited by exploiting the earth’s natural resources. Therefore, he argued, the Western countries must fund the poorer countries so their economies can catch up with America. President Obama supported this UN idea.
Under Strong’s leadership, the 1972 United Nations Stockholm Conference made the environment an international agenda. Strong commissioned the report by Barbara Ward and Rene Dubos, “Only One Earth: The Care and Maintenance of a Small Planet,” to help promote the Principles of the Stockholm Declaration.

In 1978, Professor Bert Bolin of Sweden and his tiny band of meteorologists proposed the rise in atmospheric CO2 causes a rise in temperature, and human CO2 emissions may be bad for mankind.
In October 1985, UNEP and the UN World Meteorological Organization (WMO) sponsored the first international conference on climate change in Villach, Austria. Bolin presented his theory with an urgent call to action. Strong made Bolin’s climate theory a key part of UNEP and thereafter protected the theory from critique by the scientific community.

Strong was a member of the Brundtland Commission. The Brundtland report warned that human CO2 could raise global temperatures. These increased temperatures, it claimed, would harm agriculture, “raise sea levels, flood coastal cities and disrupt national economies.” The report called for a major global effort to curb emissions of carbon dioxide and other greenhouse gases. It promoted the idea of “sustainability” as a possible solution to human-caused environmental problems.

In 1988, UNEP and WMO formed the UN Intergovernmental Panel on Climate Change (IPCC). The U.S. government promoted and funded the IPCC.
The IPCC appointed Bolin to be its first chairman and his supporter, John Houghton, to lead “Working Group 1” that would produce IPCC’s climate reports. IPCC’s goal is to produce reports that show human emissions cause climate change. IPCC’s goal is NOT to find the true cause of climate change.
In 1990, IPCC’s First Assessment Report made global headlines. It claimed human CO2 caused global warming and warned the world must reduce its CO2 emissions by 60 percent immediately to save the planet.
Environmentalists quickly adopted the IPCC climate claims because they supported their environmental agenda.

In 1988, James Hansen, head of NASA’s Goddard Institute for Space Studies (GISS), testified before a Senate committee chaired by Senator Tim Wirth. Senator Al Gore was on the committee. Hansen predicted the world was headed for a global warming disaster.
The media produced headlines across America and cover stories in Newsweek and Time. Senator Al Gore carried the climate change agenda in America.

In June 1992, Strong, Secretary General of the U.N. Conference on Environment and Development, chaired the conference in Rio de Janeiro, the “Earth Summit.”
US President Bush and 107 other world leaders attended. Some 20,000 climate activists and green lobby members attended. All expenses were paid by UN and government funds.
Strong’s Summit speech declared,

“A shift is necessary toward lifestyles less geared to environmentally damaging consumption patterns. We may get to the point, where the only way of saving the world will be for industrialized civilization to collapse. Isn’t it our responsibility to bring this about?”

“sustainable global society founded on the principles of respect for the Earth and life in all its diversity, economic and social justice, and a culture of peace and non-violence.”

Strong long supported global governance at the expense of national sovereignty. He said environmental mandates require the eventual dismantling of the power of the nation state:

“It is simply not feasible for sovereignty to be exercised unilaterally by individual nation-states, however powerful. It is a principle which will yield only slowly and reluctantly to the imperatives of global environmental cooperation.”

“We need a system of global governance through which nations can cooperate and deal with issues they cannot deal with alone. The ultimate example is climate change.”

“With a very high level of confidence, the increase in CO2 emis¬sions from fossil fuel burning and those arising from land use change are the dominant cause of the observed increase in atmospheric CO2 concentration.”

“The removal of human-emitted CO2 from the atmosphere by natural processes will take a few hundred thousand years (high confidence).”

Climate alarmists believe these IPCC claims without questioning the science. They reject evidence that proves their belief is wrong. They are anti-science. They are delusional about climate science.
There is ample proof that human CO2 emissions are not the dominant cause of the increase in atmospheric CO2 and are not the cause of climate change.

The climate cult is a groupthink.

Today, almost all major news media, government websites, and case law assumes the IPCC climate theory is correct. But the IPCC theory is not correct. The IPCC theory is groupthink and nothing more.
In 1972, Yale professor of psychology, Irving Janis, published the results of his study on human behavior, Victims of Groupthink: A Psychological Study of Foreign Policy Decisions and Fiascoes. He revised and enlarged his second edition published in 1982.
He defined the term Groupthink to describe what happens when people get caught up in a pattern of collective psychological behavior. He showed that groupthink has three distinct features:
Janis showed, with examples, how people in a groupthink make bad decisions.
In contradiction to science, people believe what they want to believe. Even intelligent people who should know better.
Facts don’t change people’s minds. Emotions change people’s minds. Climate alarmists are ruled by emotions, not science.

My last letter described the following in more detail.

The problem for America

If our goal is to promote climate truth, then, in America, we must support the Republican Party and especially President Trump.
President Trump supports climate truth. All Democrats oppose climate truth. If President Trump does not get reelected, our efforts to promote climate truth will pretty much expire with him.
At this time, no one can predict whether President Trump will be reelected. There are good arguments on each side.
On the positive side, a good economy helps reelect a president. At present, the economy is very good. Trump has created 7 million new jobs. Unemployment has fallen from 4.8% to 3.5%. More Americans are now working than ever before. There are more job openings that there are people looking for a job. The stock market is up. However, the economy could change before the election.
On the negative side, changing demographics favor the Democrats. Every day, some 10,000 Americans turn 18 and become eligible to vote. Over 80 percent of them are confirmed socialists, brainwashed by America’s schools, who will vote Democratic socialist. They have been taught to reject capitalism. They are far more radical than liberals were at any time in America’s history. These millennials may determine the outcome of the next election.