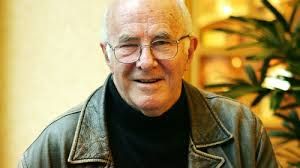 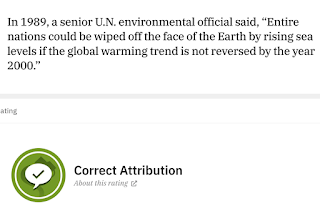 A senior environmental official at the United Nations, Noel Brown (no relation), says entire nations could be wiped off the face of the earth by rising sea levels if global warming is not reversed by the year 2000. Coastal flooding and crop failures would create an exodus of "eco-refugees," threatening political chaos, said Brown, director of the New York office of the UN Environment Program (UNEP). He said governments have a 10-year window of opportunity to solve the greenhouse effect before it goes beyond human....  (Source) (Checked by Snopes - see above)

In 1989, the UN couldn't get it right, has its propaganda or even their "science" improved since then?

Why do Western Governments, Main Stream Media and alarmists keep pushing the #agwFraud?
Posted by Geoff on November 26, 2019 No comments:

A simple explanation of the new climate science,

Only 15 per cent of all human carbon remains in the atmosphere by 2020. That 15 per cent is equal to 31 ppm.
In 2020, both human carbon and natural carbon have added carbon to the carbon cycle. This has increased atmospheric CO2 from IPCC’s 280 ppm to 411 ppm, or by 131 ppm.
If the natural CO2 level had stayed at 280 ppm, as IPCC claims, then human CO2 would have added 31 pm to give a total of 311 pm. Therefore, the natural CO2 level must have increased by 100 ppm, from 280 to 380, to produce the CO2 level at the end of 2019.
Human carbon has added 31 ppm or about 25 per cent of the new carbon. Nature has added 100 ppm or about 75% of the new carbon.
IPCC’s human carbon cycle calculations are invalid because IPCC based its calculations on its assumption that human CO2 emissions caused all the CO2 increase above 280 ppm. IPCC refused to test its assumption. IPCC made its assumption an alarmist claim.
The Physics model has tested IPCC’s assumption and proved it is wrong.
How human carbon would change if all human CO2 emissions stopped in 2020.
The Physics model shows how human carbon would flow from the atmosphere to the other carbon reservoirs if human CO2 emissions stopped in 2020.
Figure 4 shows the percentages of human carbon in each carbon reservoir in 2100 under the assumption that all human CO2 emissions stopped in 2020.
The percentages in Figure 4 have moved toward the percentages in Figure 1. Most human carbon has moved to the deep ocean. Very little remains in the atmosphere and surface ocean.
Only 4 percent of human carbon would remain in the atmosphere by 2100. That is equivalent to an increase in atmospheric CO2 of 8 ppm. That amount of increase cannot cause any measurable climate change.

A significant percentage, 19 percent, of human carbon remains in the land.
Where did the new natural carbon come from?
The Physics model indicates the warming of the Earth after the Little Ice Age caused carbon stored in the oceans and land to be released into the carbon cycle.
Conclusions
IPCC made serious blunders in its calculation of the human carbon cycle. IPCC’s blunders are the source and basis of all climate alarmism. IPCC’s climate blunders have worked their way into legal decisions, legislation, government regulations, and business decisions.
The new calculations, amazingly simple, prove the IPCC errored in its calculation of the human effect on climate.
There is no valid scientific basis for climate alarmism.
Posted by Geoff on November 23, 2019 1 comment:


Human CO2 does not cause climate change

Climate alarmists use junk science to promote their agenda (link)


Greta snarls at you for using fossil fuels. Bill Gates, George Soros, and others pay to manage and promote Greta because she inspires the brainwashed younger generation to accept junk science.


In a moment, I will to show you a simple proof that President Trump is a better climate scientist than all 11,000 climate science imposters who claim we have a “climate emergency.

Those 11,000 so-called “scientists” don’t know a freaking thing about climate science. If they were MD’s, they would be to using leaches to suck your blood. Today, they are opportunists who suck your money and your freedom. They are guilty of climate malpractice. There are not 11,000 real climate scientists on the planet.

As we have revealed on this blog (link) the 11,000 "scientists" didn't include many real scientists.

The point is events do not prove their cause. Claims that bad stuff happens does not prove we caused it. Get it?


So, how does science work?


Science works by proving theories false. Having 11,000 claims that a theory is true is meaningless. One scientist who gives you valid evidence that their theory is not true, wins the science debate. (eg see #AGWfalsiied)


Until about the 1980’s climate science was science. Now, climate “science” is climate politics and feelings. Most people don’t know the difference between real science and fake science. The climate alarmists have a political agenda, a ton of money, and an absence of science.

Climate politics wants you to believe the climate lie that our carbon emissions cause climate change. If you believe the lie, you will vote for a socialist government. Climate politics rejects climate truth because truth stops them from achieving their political agenda.
The climate activists want power. They want to control you. They want America to decline in power. They want a socialist world government to run the world and America.I don’t want that to happen. But it will take a lot more people than me to stop it.

Dr ED goes on to show how the climate alarmists are lying.

To read more, go to

Climate alarmists use junk science to promote their agenda