Time to Drain the Energy Swamp

Produced with assistance from our editors, illustrator and web master.
Please spread some Carbon Sense.

To view this whole article plus images click:
http://carbon-sense.com/wp-content/uploads/2018/08/drain-the-swamp.pdf


The Australian electricity market has become a stinking swamp covered with a tangled net of treaties, laws, rules, obligations, prohibitions, targets, taxes and subsidies. The swamp conceals the rubble of demolished coal generators; another plant destined for destruction (Liddell) is gradually sinking in the green ooze.


The swamp is slowly claiming paddocks of subsidised solar panels that, at best, only work for six hours per sunny day. The scene is uglified by spec-built regiments of ailing wind turbines that are often idle, but sometimes whirling madly. To distract the gullible media from this mess, big diesel generators charge a gigantic battery which pumps water uphill and then lets it run down again. A garbage dump of dead lithium batteries fills a nearby gully and the swamp is fenced by locked green gates. 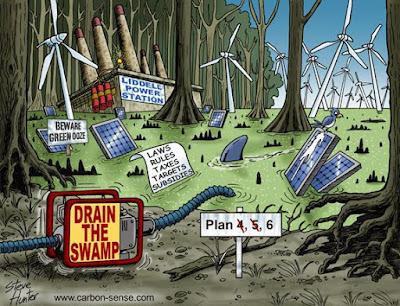 Helicopters full of unelected UN officials hover overhead, creating choppy waves of uncertainty. A pleasant hill overlooking the swamp houses the air-conditioned offices of the power regulators. They have no windows to the world and few power engineers; they stare at screens, run models and press buttons.

The way out of the energy swamp is to retrace the way we got in.

First, get to the root of the problem – UN Climate Alarmism. Disown the Paris and Kyoto Treaties and dump all the obligations, costs, hobbles and distortions they have created. Stop their pointless war on carbon energy. Carbon dioxide does not control climate but it does support all life on earth.

Then de-fund and boycott the rotten core of climate alarmism - the UNIPCC. Shun their never-ending climate conferences and cease funding all of their green tentacles. Cancel the tax exempt status of political activists posing as honest scientists.

Then unravel the electricity regulations mess. Stop politicians from banning or promoting their energy favourites – speculators should be free to build wind, solar, geothermal, wave, coal, gas, nuclear or pig-poo power generators free of all special taxes, subsidies and market mandates. But no electricity distributor, retailer or consumer should be forced to accept unreliable or expensive electricity.

Then abolish all guaranteed returns on inflated capital for those who gold-plate power lines and poles, or expect big returns on under-used connections to remote wind farms or other green energy toys. Consumers should not be saddled with these hidden green taxes.

All electricity producers and retailers should face competitive market prices, get no special subsidies and obey the same tax laws. But they should be encouraged to enter into long-term contracts to supply base-load or peak power at agreed prices. Such contracts could underpin construction of new reliable generation capacity.

The choice for our crippled electricity industry is stark – swift surgical reform and practical innovation or let the lights go out as our once-cheap-and-reliable grid drowns in the smelly regulatory swamp.

If Solar And Wind Are So Cheap, Why Are They Making Electricity So Expensive?

Even the Government Regulator recognises the green power poison in Australia’s grid: https://stopthesethings.com/2018/07/14/competition-watchdog-slams-subsidised-wind-solar-demands-government-investment-in-reliable-affordable-coal-fired-power/

All on the Road to China

The Green-ants said “You can’t burn coal” – so we sent our coal to China. Then our factories and our smelters closed and followed the coal to China.

The Green-ants said “You can’t eat beef” – so we sent our beef to China. Then burger chains and canneries closed and followed the beef to China.

The Green-ants said “Protect the trees” – so our grasslands went to weeds. Then China’s wool cheques disappeared and graziers went on welfare.

The Green-ants said “Don’t mention nukes” – so we shipped those fuels to China. Then Chinese power costs fell while ours just kept on soaring.

The Green-ants said “You can’t frack gas” – so we sent our drills to China. Then geologists and engineers were fired and followed the rigs to China.

Then blackouts came and jobs got scarce, so our kids chased jobs in China.

Today we import what we need and our cash is shipped to China.

And now we sit in flickering light, dreaming of times when factories and smelters flourished, work was honoured, explorers and builders were heroes, miners and farmers paid the nation’s bills, electricity was cheap and reliable, and to produce things was no crime. 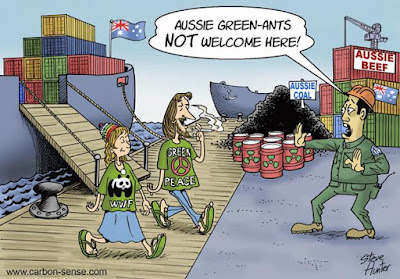 Viv Forbes is a grass farmer, geologist and financial analyst. He has solar panels on his farm shed and grid power connected but no other vested interest in power generators except as a consumer. He holds shares in a small Australian mining company exporting coal to Asia, and earns intermittent income from economic analysis and breeding meat sheep.
We welcome comments. If you would like to comment on anything in this newsletter go to:
https://carbon-sense.com/2018/08/01/drain-the-swamp/