A failure of Federal and state governments to ensure power certainty. 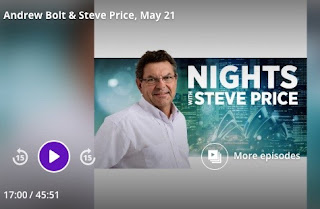 Steve introduces National Political Editor Macquarie Media Michael Pachi and they talk of AGL’s refusal to sell off Liddell, a big coal fired power station in NSW, which, if taken out of the system will cause power shortages. If and when AGL closes Liddell, AGL will make money from the artificial inflated prices paid to renewable/unreliable energy.

Andrew notes that AGL, last year,  took reporters through the plant to show how it was “worthless, a pile of junk, falling to bits”. This is contrary to recent comments from previous former Chairman of Macquarie Power, Evan Rees. (link)

Andrew asks Michael: “What can the government now to make sure it stays open given their knee-jerk reaction to Tony Abbott when he said to  compulsory buy it and then on-sell it to Alinta.”

Pachi: Abbott said today that..AGL is not in the national interest and that the Federal Government should buy it forcibly from AGL.  ….Whether that can happen or not, I don’t know….

Price and Pachi say that the Federal Government doesn’t have the power to do that.

Andrew: If the issue is - the government does not have the legal power to compulsory acquire this power station, why doesn’t it simply says so?

Before the NSW Government sold Liddell for $0 or $1, Macquarie Generation had spent $30M revamping it too make it good for the next 20 years (LINK). There are two solutions that the government can zero in on AGL.

The first is a state based solution. We have to put this in a context of what Freydenberg is saying: he says….despatchable power…. will not be able to meet demands and he quotes the AEMO…That means an essential service, ie the supply of electricity, is under threat.

All the states, which own the electricity supply in this country, have “Essential Services Acts.”

And they can come in and do what they want! if there is a threat to the electricity supply.

Andrew: What a very good point! You are so right!

Anthony: They can take it over, control it…..
WOW!

Andrew: What did we used to pay per Megawatt Hour?

Anthony: ….Liddell was pumping out Electricity for 2.7cents per kilowatt hour - $27 per megawatt/hour.

Anthony: Renewable Power gets preferential treatment. There is NO renewable power coming through. The sun has set and it is not a windy night. That’s why it has come down. Those prices you have quoted in off-peak times are so dear, because the coal fired power stations are duplicating the power of renewables. They have to pay for the power of renewables before they can begin to cover their own costs.

That’s why power in this country is so dear, generally now, because you have two systems running. The coal fired power stations have to keep running to back up the [unreliable-ed] renewables and they have to preferential buy power from the renewables when the renewables are producing power.

The Federal Government could FORCE AGL’s hand by simply removing ALL SUBSIDIES to renewables right now.