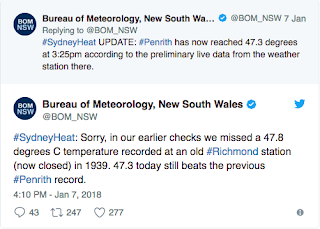 Will Steffen of the Climate Council has dubbed the summer of 2016/17 as the ‘angry summer.’

If the realist side of the debate had made a similar look at a local event to negate the alarmists, we would have been accused of cherry-picking.

Has Professor Will forgotten the ‘global’ part of climate change née global warming?

And as for our alarmist-biased Bureau of Meteorology they tweeted that Sydney (actually Penrith) had it’s hottest day EVAH!!  (see above)

WOW! Who can remember Penrith in 1939 and those horse-drawn SUVs racing along Jane Street spewing emissions into the air.

AND, Warwick Hughes points out that, back in 1939 there was another recording site at Richmond:

Last Sunday 7 Jan 2018 Our ABC reports the BoM - Sydney hits its highest temperature recorded since 1939 with Penrith reaching 47.3C. The BoM had just belatedly found that RICHMOND RAAF 067033 hit 47.8 on 14 Jan 1939. But there is much more to the history of hottest days in Sydney. There was another site recording at Richmond in 1939; John Tebbutt's historic Observatory which recorded 122°F or 50°C on 11 Jan 1939 as reported in the Windsor and Richmond Gazette Fri 13 Jan 1939 Page 3 Sweltering Week Sets New Hawkesbury District Record.

Meanwhile Prof Will will try to ignore that fact that more of the globe is suffering from cold.