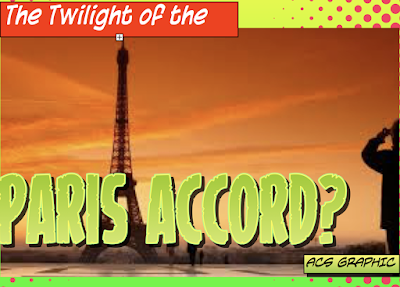 President Trump has extinguished all hopes that USA will join the Paris Climate Agreement. Since then, other countries are heading towards the Climate Exit. An increasing number of prominent people are joining the campaign to counter the falsehood that man-made CO2 emissions drive global climates, and to expose the threat that UN agencies will take control of every aspect of our lives. The list of dissidents includes:

Tim Ball of Canada led the rush for the exit:

“Canada has more culpability than any other nation for creating and perpetuating the climate deception. It is not an exaggeration to say that Canada was central to creating and mobilizing the false claim of anthropogenic global warming (AGW).”

Marc Marano from USA continues to press the need for Clexit:
https://clexit.net/2018/08/16/un-pleads-for-ratification-before-mass-clexit/

Graham Williamson from Australia explains why this is not just about climate alarm and the war on coal – there is a far deeper agenda. This not-so-secret agenda covers climate regulations and carbon taxes, paying climate “debts’, enforcing sustainability, control of education, wealth re-distribution, enforcing  a new world order, controlling national boundaries and migration, enforcing global environmental laws and preventing environmental backsliding by deplorables.

Once we are out of the Paris Climate Agreement we should review our membership of and contributions to all UN Agencies that threaten our sovereignty and our prosperity.

Nils-Axel Mörner from Sweden supports the need for world-wide Clexit and writes on the treason of the Swedish establishment:

“The Bolin-Palme treason against Science, the IPCC and Paris illusions, and a Clexit solution.”


“France Too Needs to Clexit the Paris Climate Agreement.”

Roger Tattersall from UK (which is battling to escape the suffocating blanket of the EU Brexit and Clexit.) writes:

Herman A (Alex) Pope (retired from NASA in Houston in 2007) writes:


“Climate changes in natural cycles and man does not cause them.”


“I hope our new government abandons the Paris Agreement.”https://clexit.net/2018/09/15/why-australia-should-clexit-paris-treaty/


He is supported by Bob Beatty, Brisbane, who says –


“Australia must Clexit - Leave While We Still Can.”


“Why We Should all Clexit.”

She also invites us to take this Climate change IQ Test:
https://www.ddponline.org/category/cciq/
Finally, Germany’s Grand Plan to Abolish Carbon Fuels Fails:http://clexit.net/2018/08/29/german-plan-to-abolish-carbon-fuels-fails/And the UN admits that the Paris deal was a fraud:
https://www.investors.com/politics/editorials/the-un-admits-that-the-paris-climate-deal-was-a-fraud/


The globalists made enormous gains while western politicians and media were mired in petty politics. We need to recognise the big picture, roll back the totalitarian green tide and push the need for Clexit and UNexit.

Back in the chaotic dying days of the Whitlam-Cairns-Connor government, Canberra was buzzing with Rex Connor’s grand plans for nationalisation of the mining industry, a national energy grid and gas pipelines linking the NW Shelf to the capital cities, all to be funded by massive foreign loans arranged by a mysterious Pakistani named Khemlani. Malcolm Frazer staged a parliamentary revolt. The economy slumped.

A British observer at that time was asked who was the greater Prime Minister - Harold Wilson or Gough Whitlam. He replied:


“Any fool can bugger up Britain but it takes real genius to bugger up Australia.”

Now, we have incredible tri-partisan plans to cover the continent with a spider-web of transmission lines connecting wind/solar “farms” sending piddling amounts of intermittent power to distant consumers and to expensive battery and hydro backups - all funded by electricity consumers, tax-assisted speculators and foreign debt.

We are the world’s biggest coal exporter but have not built a big coal-fired power station for 11 years. We have massive deposits of uranium but 100% of this energy is either exported, or sterilised by the Giant Rainbow Serpent, or blocked by the Green-anti’s.

Australia suffers recurrent droughts but has not built a major water supply dam for about 40 years, and the average age of our hydro-electric plants is 48 years. And when the floods do come, desperate farmers watch as years of rain water rush past to irrigate distant oceans.

Once, Canberra and the states encouraged oil and gas exploration with geological mapping and research - now they restrict land and sea access and limit exports.

Once, Australia was a world leader in refining metals and petroleum - now our expensive unreliable electricity and green tape are driving these industries and their jobs overseas.

Once, Australia’s CSIRO was respected for research that supported industry and for doing useful things like controlling rabbits and prickly pear and developing better crops and pastures. Now CSIRO panders to global warming hysteria and promotes the fairy story that carbon taxes and emissions targets can change the world’s climate.

Once, young Australians excelled in maths, science and engineering. Now, they are brain-washed in gender studies, green energy non-science and environmental activism.

Once, Australians were proud of our history, our ancestors and our achievements - now we are supposed to feel guilty and apologise.

Once, Australia had a big coastal fleet carrying passengers and goods and catching fish. Now our roads are clogged with cars and freight and we import seafood.

Once, the opening of a railway or the discovery of oil, coal, nickel or uranium made headlines. Today’s Aussies harass explorers and developers, and queue at the release of the latest IPad.

As Australia’s first people discovered, if today’s Australians lack the will or the knowledge to use our great natural resources, more energetic people will take them off us.