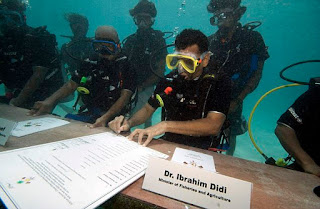 The Maldives Government, in 2009, held a cabinet meeting underwater:


The 30-minute cabinet meeting held six metres below sea-level was intended to show what the future could hold for the Maldives.

So, would this government, threatened with being inundated by 6 metre sea-level rises, spend money on new hotels and new airports? Well, nine years after the underwater cabinet meeting, that is exactly what is happening.

10 new hotel openings in the Maldives

The next year or so is going to be a busy time for the hospitality trade in The Maldives. A clutch of 10 new hotels will fling open their doors throughout 2018 and into early 2019, expanding its already well-established portfolio of luxury resorts.

Yes, spend $$$$s on hotels and airports built at sea level and  yet the Maldives government are asking for $$$$s to assist locating citizens at higher land atolls. 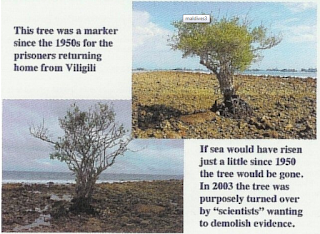 Remember, years ago Nils-Axel Mörner exposed the fact that a tree revealed that there had been very little sea level rise in the Maldives. Alarmist scientists/terrorists from Australia tore down that tree because it exposed the fraud of the man-made global warming religion.
See also Nils-Axel Mörner's Paper: Sea level is not rising. (link)