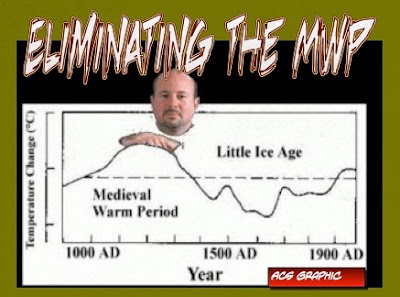 2018 “Public Engagement with Science” award by the American Association for the Advancement of Science (AAAS):

The Winner is: Michael Mann

The Penn State Professor infamous for the flawed "hockey stick" graph 'will receive the 2018 “Public Engagement with Science” award by the American Association for the Advancement of Science (AAAS) this weekend. The award will recognize Mann’s “tireless efforts to communicate the science of climate change to the media, public and policymakers.” '

SO, regarding Mann's advancement of science; was he advancing science when he refused to share his "hockey stick" data with fellow scientists?


Back in 2003, Michael Mann, now at Penn State University in University Park, initially refused to make available the data and code relating to the “hockey stick” graph. (link)

And when McIntyre and McKitrick fed these random (ly generated) data into the Mann procedure, out popped a hockey stick shape! (link)


That discovery hit me like a bombshell, and I suspect it is having the same effect on many others. Suddenly the hockey stick, the poster-child of the global warming community, turns out to be an artifact of poor mathematics.

Was Mann advancing science when, in a Canadian court action suing Dr Tim Ball, he again refused to comply with the court direction to hand over all his disputed graph's data.


"The negative and unresponsive actions of Dr. Mann and his lawyer, Roger McConchie, are expected to infuriate the judge and be the signal for the collapse of Mann's multimillion dollar libel suit against Dr. Ball. It will be music to the ears of so-called 'climate deniers' like President Donald Trump and his EPA Chief, Scott Pruitt." (link)

Was Mann (and others) advancing science at ClimateGate:


by helping Dr. Phil Jones - a colleague of Dr. Mann's who was likewise implicated in the climate research scandals emanating from the University of East Anglia - destroy emails and other data to avoid their publication via the Freedom of Information Act."

Steve Milloy, author of “Scare Pollution” and publisher of junkscience.com is quoted as saying:

“The AAAS has sent quite a message to the public by giving a communications award to Michael Mann, who made multiple false claims about being a Nobel prize winner, including to a court of law. Mann has conspired with others to silence critics and prevent opponents from being published in science journals. He has sued his critics but, ironically, spends a great deal of time making ad hominem attacks against politicians and scientists with whom he disagrees.” (link)


“What to say about this, other than the climate science world is upside down?  On one level, all this is highly amusing. On another level, I absolutely despair for the integrity of academic climate science.”