Honorable Prime Minister of Fiji and President of COP23

The community assembled at the COP23 meeting in Bonn badly wants temperature to rise according to models proposed (but never verified, rather seriously contradicted) and sea level changes that may pose serious flooding threats to low lying coasts provided sea level would suddenly start to rise at rates never recorded before (which would violate physical laws as well as accumulated scientific knowledge over centuries).

We have been in your lovely country and undertaken a detailed sea level analysis, which beyond doubts indicates that sea level is not at all in a rising mode, but has remained perfectly stable over the last 50-70 years. Hence all threats of an approaching general sea level flooding are totally unfounded.

Whatever economy, politics and project agendas may want to put in the centre, the true scientific community must insist that only facts as revealed in nature itself and in laboratory experiments can provide trustworthy results.

These are the facts

We have (with references at the end) 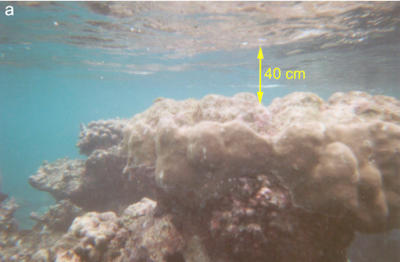 Figure 1. The critical depth for coral growth is 40 cm below low-tide-level (when the photo was taken). If sea level is not rising the corals are forced to grew laterally. We have studied several such cases at several different sites in the Fiji. We undertake radiocarbon dating at al numver of sites of the dead center always with ages as ”younger than 1950”, implying that sea level has remained perfectly stable over the last 50-70 years – and corals do not lie.
(from Mörner & Matlack-Klein, 2017d)

Figure 2. Sea level changes in the Yasawa Island of Fiji (from Mörner & Matlack-Klein, 2917c). Sea level was high in the 16th and 17th century (1), low in the 18th century (2) and at about the present level over the 19th, 20th and early 21st centuries (3) wit a somewhat highe level in the eary 19th century and with a perfectly stabe sea level during the last 50-70 years as indicated by C14-dated microatolls at multiple sites. Consequently there is a total absence of a present sea level rise – i.e. the threat of a future flooding is liftet off.

Our message (or rather plead) to You as President COP23 is

Listen to your own field evidence in the Fiji islands

In the true spirit of the French philosopher Jean Jacques Rousseau let us say:


That is setting field evidence in the centre

Stockholm, November 12, 2017
Nils-Axel Mörner
morner@pog.nu
Head of Paleogeophysics & Geodynamics at Stockholm University, Sweden (1991-2005)
President of the INQUA Commission on Sea Level Changes and Coastal Evolution (1999-2003)
Leader of the Maldives Sea Level Project (2000-2007)
Chairman of the INTAS project onGeomagnetism and Climate (1997-2003)
Leader of the Fiji New Sea Level Project (2016-2017)
Patronus Skytteanus of the Skytte Foundation at Uppsala University (1979-2017+)
Awarded the Golden Condrite of Merit from Algarve University (2008) “for his irreverence and contribution to our understanding of sea level change”
Author of several hundreds of peer-reviewed scientific papers and several books
and
Pamela Matlack-Klein co-author and co-investigator The Portuguese Sea Level Project pmkdragon@gmail.com


Acknowledgements: Our research group has had the pleasure to undertake sophisticated studies in the Fiji Islands. We have become much in love with the remarkable nature and the wonderful local people of the Yasawa Islands. Our criticism should be seen as a sign of our respect to the irrefragable field evidence, and the nice local people that certainly deserve straight-forward and unbiased information with respect to their own future environments.
References
Mörner N-A, Matlack-Klein P (2017a) The Fiji tide-gauge stations. International Journal of Geoscience, 8: 536-544. https://doi.org/10.4236/ijg.2017.84028
Mörner N-A, Matlack-Klein P (2017b) Coastal erosion in the Yasawa Islands, Fiji. Nature Science, 9 (5): 136-142. https://doi.org/10.4236/ns.2017.95014
Mörner N-A (2017c) Our Oceans – Our Future: New evidence-based records from the Fiji Islands for the last 500 years indicating rotational eustasy and absence of a present rise in sea level. International Journal of Earth & Environmental Sciences, 2: 137. https://doi.org/10.15344/2456-351X/2017/137
Mörner N-A, Matlack-Klein P (2017d) New records of sea level changes in the Fiji Islands. Submitted, under reviewing.
Mörner N-A (2017) Coastal morphology and sea level changes in Goa, India, during the last 500 years. Journal of Coastal Research, 33: 421-434.
DOI: 10.2112/JCOASTRES-D-16A-00015.1
Clutz R (2017). Fear not for Fiji. Science Matters https://rclutz.wordpress.com/2017/10/24/fear-not-for-fiji/
Tallbloke’s Talkshop (2017) WCCC4 Rome: Interview with Nils-Axel Mörner
https://tallbloke.wordpress.com/2017/10/24/wcc4-rome-interview-with-nils-axel- morner/