More holes in the AGW Theory.

A Paper by Scafetta et al published in the Journal of Heat and Technology (link) suggests that GCMs (Global Climate Models) “are very likely flawed." 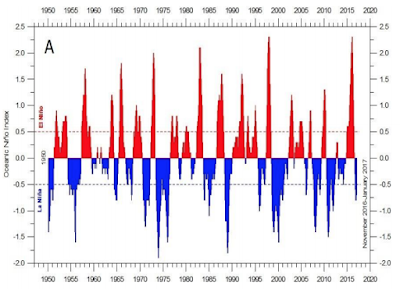 The period from 2000 to 2016 shows a modest warming trend that the advocates of the anthropogenic global warming theory have labeled as the "pause" or “hiatus.” These labels were chosen to indicate that the observed temperature standstill period results from an unforced internal fluctuation of the climate (e.g. by heat uptake of the deep ocean) that the computer climate models are claimed to occasionally reproduce without contradicting the anthropogenic global warming theory (AGWT) paradigm. In part 1 of this work, it was shown that the statistical analysis rejects such labels with a 95% confidence because the standstill period has lasted more than the 15 year period limit provided by the AGWT advocates themselves. Anyhow, the strong warming peak observed in 2015-2016, the "hottest year on record," gave the impression that the temperature standstill stopped in 2014. Herein, the authors show that such a temperature peak is unrelated to anthropogenic forcing: it simply emerged from the natural fast fluctuations of the climate associated to the El Niño–Southern Oscillation (ENSO) phenomenon. By removing the ENSO signature, the authors show that the temperature trend from 2000 to 2016 clearly diverges from the general circulation model (GCM) simulations. Thus, the GCMs models used to support the AGWT are very likely flawed. By contrast, the semi-empirical climate models proposed in 2011 and 2013 by Scafetta, which are based on a specific set of natural climatic oscillations believed to be astronomically induced plus a significantly reduced anthropogenic contribution, agree far better with the latest observations. (emphasis added)