Things that matter to a Warmist

Barbados' newest knight, retired university professor, Dr. Henry Fraser, received the Accolade of Knight of St. Andrew, in the 2014 Independence Day Hours. Sir Henry Fraser was named as a result of The Knighthood of St. Andrew being bestowed on him for his outstanding contribution to the medical profession and representation of Barbadian culture, especially in the area of its architectural history. 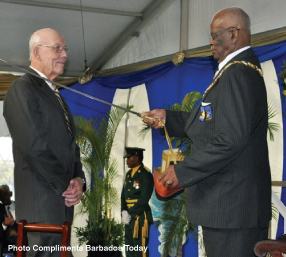 Sir Henry, a medical practitioner by profession, has worked for many years as a lecturer in medicine at the University of the West Indies and now serves as an Independent Senator in the Barbados Parliament where he has gained an outstanding reputation for his work on the historic treasures of Barbados.

He has received a plethora of other awards, including the UWI’s Pelican Award, Paul Harris Fellow of Rotary International and the Gold Crown of Merit (GCM) in the Barbados Honours of 1992.

He was appointed an Independent Senator in April of 2012.

The bigger the lie frequently repeated, the more people will believe it.

And so, there are many deluded by the fraud of man-made CO2 causing global warming and the frequent lies about climate change.

But there is no dispute that the warming of our seas increases frequency and severity of these devastating hurricanes.

This is contradicted by the fact that, although seas have been reputedly warming for years, there has been an 11 drought in hurricane activity (at least on Mainland USA) See UAH’s Dr. Roy Spencer here -11 year drought.

The destruction in the Caribbean is a tragic story.