Is the Pope Stupid? 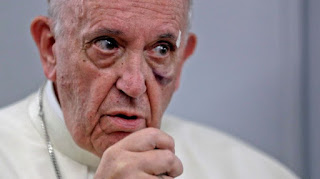 Chris D'Angelo (Chris of the Angels?) writing for the HuffPo under the headline:

Climate change denials amid catastrophic hurricanes are a reminder that humans are not a particularly smart species, Pope Francis said Sunday while flying over areas in the Caribbean decimated by Hurricane Irma.

Perhaps the Pope has not caught up with the IPCC. They declared that extreme weather events are not caused by the alleged Anthropogenic Global Warming  (AGW.)

“Man is stupid,” Pope Francis said.  That cannot be denied. Think of how many reasonable thinking persons have been taken by the  man-made global warming fraud!


The pope — who has sparred with President Donald Trump on several issues, including climate change — also urged the climate skeptics of the world to consult with a scientist.

Yep, I have consulted with many scientists. That was what convinced me that the falsified AGW hypothesis was a fraud. (LINK)


According to Crux, journalists asked the pope about the moral responsibility world political leaders have to fight against climate change.

Francis warned that “history will judge those decisions,” and that if humans fail to curb climate change we “will go down,” according to reports.

Will history also a judge a Pope who allows third world countries to suffer without the benefit of cheap coal based power?


Climate (er....read Alarmist) scientists say powerful back-to-back hurricanes Harvey and Irma — which battered the Gulf Coast, the Caribbean and the U.S. Southeast over the last two weeks — were made worse by climate change.

(REPEAT_) Perhaps the Pope has not caught up with the IPCC. They declared that extreme weather events are not caused by the alleged Anthropogenic Global Warming  (AGW.)

Can the Pope and his scribe Chris of the Angels be re-educated? Can they learn that they are sprouting FAKE NEWS? FAKE SCIENCE?