Medieval Warm Period was real, global, & warmer than the present. 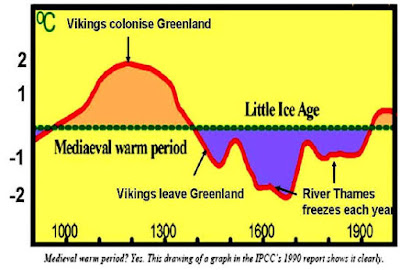 Alarmists will tell you that the Medieval Warm Period was

a) not as warm as the late 20th Century warming; and

b) was only in Europe.

This alarmist propaganda goes against the real data. Penn State Professor Michael Mann has made similar claims of modern temperatures being the warmest, but such “Hockey Stick” temperature claims have been demolished in the scientific literature.


The latest research clearly reveals that the Medieval Warm Period (used to be referred to as the Medieval Climate Optimum) has been verified and was in fact global, not just confined to the Northern Hemisphere.

In addition, The Science and Public Policy Institute reported in May 2009: “More than 700 scientists from 400 institutions in 40 countries have contributed peer-reviewed papers providing evidence that the Medieval Warm Period (MWP) was real, global, and warmer than the present. And the numbers grow larger daily.”

Climate Depot then links many papers and sources. (see here) Following are examples:

New Peer-Reviewed Study: Climate was HOTTER in Roman, medieval times than now — UN IPCC has got it all wrong, say scientists — Published in hefty climate journal Nature Climate Change, the cooling effect of orbital shifting on the climate has been up to four times as powerful as anthropogenic (human-caused) warming pressures’

New paper confirms Little Ice Age was a global phenomenon, related to solar activity — Paper published in Geophysical Research Letters confirms that ‘the Little Ice Age was a global event, probably caused by a change in solar [activity] and volcanic forcing [activity], and was not simply a seesaw-type redistribution of heat between the hemispheres as would be predicted by some ocean-circulation hypotheses’


Peer Reviewed Study Establishes Unprecedented Medieval Warming On Tropical Island In Southern HemisphereWirrmann et al. confirmed that the peak mangrove growth was during the 950 to 1250 AD period, which would conform to the approximate Medieval period in the Northern Hemisphere. The tropical mangrove plant prospers in warmer climates.

As can be seen, the links cover most of the globe. Click on each area and peer-reviewed papers are listed and rated as level 1,2 and 3. For a description of the study levels below, click here.

Here are a few:

Just a sample, but it can be seen from the volume of peer reviewed papers:


“More than 700 scientists from 400 institutions in 40 countries have contributed peer-reviewed papers providing evidence that the Medieval Warm Period (MWP) was real, global, and warmer than the present. And the numbers grow larger daily.”


So, that means the alarmists are the true deniers.