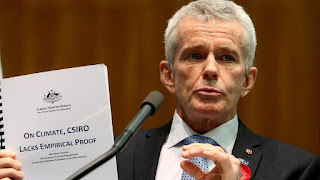 2 JUNE 2017
One Nation Senator Malcolm Roberts has called for an immediate abandonment of the Paris Climate Agreement after President Trump today withdrew the United States.
President Trump reaffirmed his commitment to putting the American people first and stated that he is protecting American jobs and accuses the treaty of being designed to redistribute U.S. wealth to other countries.
Australians are feeling the economic pain from climate policies in our cost-of-living and daily lives - unaffordable energy costs, high unemployment, a stagnant economy and a rapidly rising national debt.
“The Paris Climate Agreement has one aim, to de-industrialise Western nations to satisfy the United Nations Socialist agenda – redistributing $100 trillion from prosperous Western nations by 2100." stated Roberts.
China, India, Russia and other Asian and African are not applying the same handbrake to their economies which will give them an unprecedented economic advantage over Australia.
He added “By signing this agreement our Government ceded our sovereignty to the United Nations - an act of treachery against the Australian people - and must be rescinded immediately.”
“Australians did not vote to give away our manufacturing industries to China and India or to make electricity a luxury afforded only by the wealthy” stated Senator Roberts
“Even if we stop all industry and transport tomorrow, it will make not one iota of difference to climate”
Senator Roberts has given the LNP, ALP and Greens a clear choice “you need to decide whose side you are on, Australia’s or the United Nations?”
The Australian Government should never side with foreign powers wanting to harm the economic security of our nation” said Roberts
Posted by Geoff on June 03, 2017 10 comments: