Reasons Why Ridicule Is The Proper Response To Global Warming Alarmists

A commentary column in Investors Business Daily starts with the heading

The piece was written by Kerry Jackson who said that "the radicals (or the alarmists) are acting desperately..."
Kerry continues:

Of course the alarmists can't give up their shrillness. They're still bullies who try to marginalize, shame and silence those who don't agree with their narrative that man is dangerously overheating the planet through his greenhouse gas emissions.But they're the ones who should be mocked.

AND here are three of Kerry's five  reasons:

Here's a high school dropout who's become fabulously rich doing what kindergartners do every day — pretending to be someone else and imagining that they are doing something they aren't doing, and probably never will or would do. It's called acting and it pays some of its practitioners well.

But it doesn't give them gravitas, something DiCaprio knows he's lacking and is struggling mightily to obtain. The fact that DiCaprio fancies himself to be a climate expert and a model of environmental morality, and the fact that elitists have enthusiastically gone along with his adult playacting, are strong indictments against the alarmist community.

First the Good News (from the Guardian):

Australia's Climate Institute to shut down, citing lack of funds for independent research

The Climate Institute will shut its doors after 12 years of providing independent advocacy and research towards climate change solutions, citing lack of funding.Australia’s first non-government organisation focused solely on climate changehas a reputation for independence but its chairman, Mark Wootton, used its closure to take a parting shot at “some in government” who have used the environment as a proxy for ideological battles.

Of course "independent advocacy" is not "ideological battles," is it?

A National Agenda for Climate Action

Of course, the Climate Institute's National Agenda for Climate Action is not "ideological battles," is it?


This poll was similar to others in that almost two thirds (63 per cent) accept that climate change is occurring.

Which of the following is closest to your opinion on climate change? (Sample = 1591) 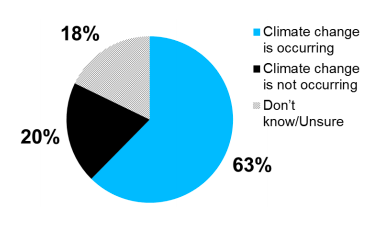 Climate has changed since the beginning of time. The 38% of people who either say climate is not changing or who aren't sure, need to inform themselves.

Why didn't the Climate Institute ask a more pertinent question:

They knew that the answer to that question would damage their case in their ideological battle.