'What that tell you?' asked Tonto.

The Lone Ranger ponders for a minute then says, 'Astronomically speaking, it tells me there are millions of galaxies and potentially billions of planets. Astrologically, it tells me that Saturn is in Leo. Time wise, it appears to be approximately a quarter past three in the morning. Theologically, the Lord is all-powerful and we are small and insignificant. Meteorologically, it seems we will have a beautiful day tomorrow.
What does it tell you, Tonto?'

'You dumber than buffalo $h!It means someone stole our tent.'

Now that may be a good joke on Facebook, but the point of that post is Observational data.
And what does observational data tell us about earth's temperature record?
Well,  here's NASA's (modified) idea: 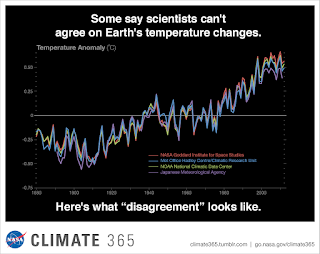 So, what is the "Observational data" for that period? What would Tonto have seen above the (lack of) tent?

Well, in January 2016, if that was when the tent was taken away: